On November 8, 2016, General Dynamics NASSCO shipbuilders delivered the Constitution, an American Jones Act-qualified ECO Class tanker, to SEA-Vista LLC. The ship was delivered during a special signing ceremony at the company’s shipyard in San Diego.

The Constitution is a 610-foot-long, 50,000 deadweight-ton, LNG-conversion-ready product tanker with a 330,000 barrel cargo capacity. The new ECO Class design symbolizes the emerging direction of the shipping industry in the U.S. toward cleaner, more fuel-efficient modes of transporting product. Construction on the ship began in June 2015. 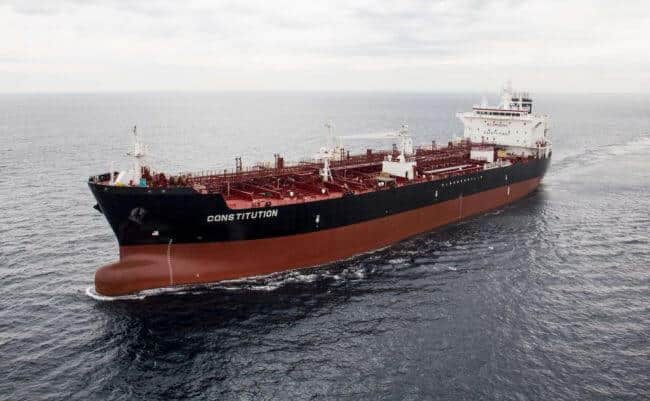 As part of an eight-ship program for two separate customers, the Constitution is the sixth ECO Class tanker built by NASSCO shipbuilders to recently join the Jones Act trade. “With this program we contracted with two customers seeking similar capabilities. A steady production run of eight ships improves hull-to-hull learning and has allowed us to deliver increasingly higher-quality, world-class vessels,” said Kevin Graney, vice president and general manager for General Dynamics NASSCO.

The Jones Act requires that ships carrying cargo between U.S. ports be built in U.S. shipyards and is responsible for more than 500,000 good-paying jobs countrywide.

NASSCO is the only major shipyard on the west coast of the United States conducting design, construction and repair of commercial and U.S. Navy ships. For its commercial work, NASSCO partners with South Korean shipbuilding power, Daewoo Shipbuilding & Marine Engineering (DSME), for access to state-of-the-art ship design and shipbuilding technologies.