Two high-speed boats from Sweden have joined the sea rescue effort in the Eastern Aegean, and it was GAC that coordinated their delivery to Greece.

The craft were sent by the not-for-profit NGO, the Swedish Sea Rescue Society (SSRS), in response to the growing humanitarian crisis that has seen thousands of refugees attempting to cross the sea to enter Europe through the islands of Eastern Greece.

According to figures from the United Nations High Commission for Refugees, in July 2015 alone 50,000 new arrivals were reported, mainly to the islands of Lesvos, Chios, Kos, Samos and Leros. 2014 was the deadliest year on record, with over 3,500 deaths while attempting to make the crossing, but 2015 looks set to set a grim new record, with at least 1,850 estimated deaths reported in the Mediterranean in the first five months of the year alone. 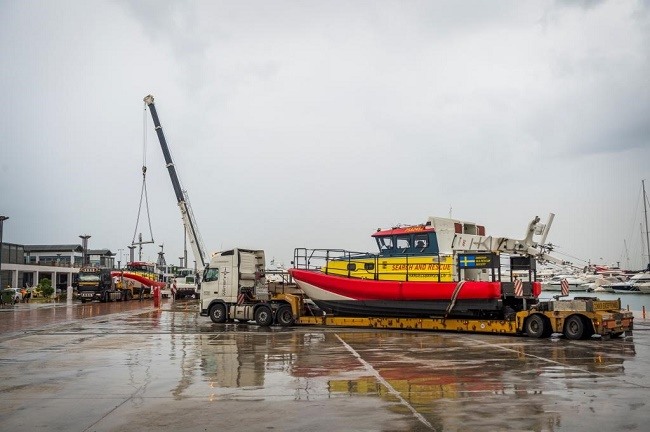 The SSRS approached GAC Sweden to coordinate the transportation of the two 12-metre boats each weighing 12 tonnes to Greece, as a matter of urgency. The route was planned, documentation arranged, and the two boats set off on low-bed trucks from Stockholm on their trip through six European countries – Sweden, Germany, Austria, Hungary, Romania and Bulgaria – before reaching Greece. Despite a few technical issues – including a change to route to exclude Italy where some issues with the load dimensions were encountered, and a truck break-down which was repaired en route in Romania – they arrived at Aghios Cosmas Marina, south of Athens, just ten days later.

There, colleagues from GAC Greece were waiting to oversee the unloading and launch of the boats for the last leg of their voyage – by sea – to the island of Samos, just a few kilometres off the Mediterranean coast of Turkey.

Capt. Rolf Westerström, CEO of the Swedish Sea Rescue Society, says: “With this project, we are able to make a real difference. Sea rescue knows no borders, we assist when we have the possibility. For this task, we needed a first class service from all suppliers, and that’s why we chose GAC as our agent.”