Furetank has taken delivery of Fure Vinga, the first in a series of 17,999 DWT product tankers with LNG operation. Fure Vinga has today, Wednesday, been transferred to Furetank and started its trip from the shipyard Avic Dingheng Shipbuilding in China sailing to Europe. 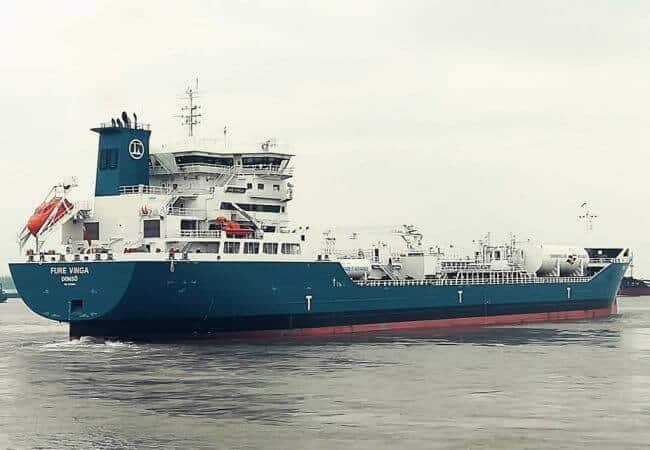 “She was delivered a month before the specified delivery time”, says Furetank’s CEO Lars Höglund when Sjöfartstidningen reached him by phone in China. He tells us that, “Fure Vinga will sail to Batam Island off Singapore, where she will load for Europe. She’ll be in Spain, where we unload the first batch, around May 15th-20th. In Rotterdam, we will unload the final load and then she goes into the Gothia Tanker system.”

Fure Vinga and her sister vessels have a cargo volume of 20,200 m3 with the main particulars LxWxD 149,9 x 22,8 x 9,36 m. These vessels are built for Ice class 1A and are Dual-Fuel categorized, with LNG as their main fuel. Due to this, they have a very low EEDI to show.

FKAB has, together with Furetank, developed the concept and FKAB is responsible for basic design, which focused largely on energy efficiency. Together with Marin, in the Netherlands, the hull lines have been fine-tuned to get an as optimized hull form, as possible, for the design speed. FKAB’s Shanghai office has made both basic and detail design, in close cooperation with Avic Dingheng Ship Yard.

The construction, of the other ships in the series, is going according to plan. ” As it looks now, we have no delays, maybe we are a little ahead of schedule,” says Lars Höglund.

Swedish-flagged Fure Vinga is the first of six new buildings as Furetank, Thuntank, Älvtank and Erik Thun have announced that they should operate with the Swedish flag.