A Kickstarter campaign has been launched for CLANDESTINE, a short film that follows the perilous journey of a group of refugees across the Mediterranean. The latest film by Writer/Director Stuart Gatt, the drama delves into the horrors that have led to the death of 2000 refugees, this year alone, trying to make it to Europe.

Written and to be directed by Stuart Gatt, with Kate Glover and Kelly Goncalves producing, CLANDESTINE also has Doctors without Borders and Human Rights at Sea as affiliated charities.

CLANDESTINE follows Emmanuel and Olu who are forced to board a boat destined for Europe. The rickety fishing-vessel, overflowing with refugees with their own stories of war, destruction and persecution, all pray that like so many before them, the bottom of the Mediterranean will not become their final resting place. Powerless to their traffickers, Emmanuel and Olu must endure illness, beatings and dehydration as their will, like their boat, is pushed to its limits by the unforgiving Mediterranean. 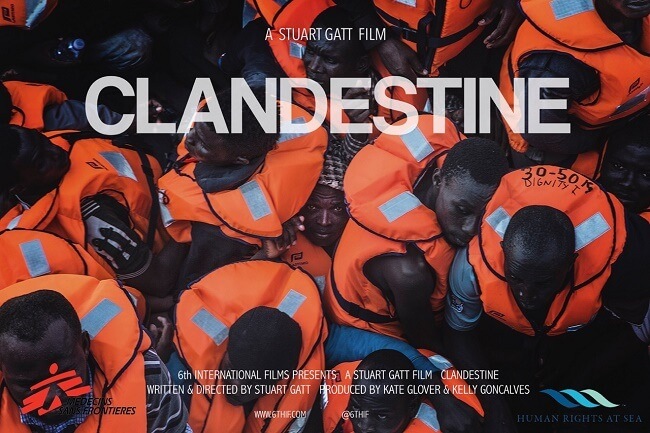 Writer/Director Stuart Gatt. Said: “The timing of this film couldn’t be more relevant with the international community suddenly aware of how serious the Syrian refugee crisis is. With this film, we aim to shine a light on another major part of the crisis; on those making the treacherous journey from Africa across the Mediterranean sea and will aim to raise social awareness that will hopefully equate to the tangible saving CEO and Founder of Human Rights at Sea, David Hammond said: “Our charity is firmly behind this initiative in further raising the level of international awareness and engagement in the issue, in providing a cinematic insight into the personal effects of such a tragic experience undergone by thousands of men, women and children and to ensure that the narrative continues. We believe in the CLANDESTINE team and their goals and we strongly encourage support for this project.”

The CLANDESTINE Kickstarter campaign is now live from with a targeted goal of £70,000. Please see here

Rescue Vessels Pulls Out About 450 Migrants From Boat Off Tunisia
Video: More Than 70 Migrants On a Rescue Ship Jump Into Sea in Frustration
ECSA & ETF Call EU To Coordinate For Solidary Solution Of Rescued Migrants On Board Maersk Etienne
Watch: Greece Coast Guards Rescue 96 Migrants From Sinking Yacht