Auckland ferry company, Fullers Group, has been fined $40,000 and ordered to pay reparations of $90,000 after passengers were injured when the Auckland ferry Kea collided with Victoria wharf at Devonport on 17 February 2015.

The company pleaded guilty to a charge laid by Maritime NZ under the Health and Safety in Employment Act that it failed to take all practical steps to ensure no action or inaction by an employee harmed any other person. Sentencing took place in Auckland District Court today (29 May 2017). 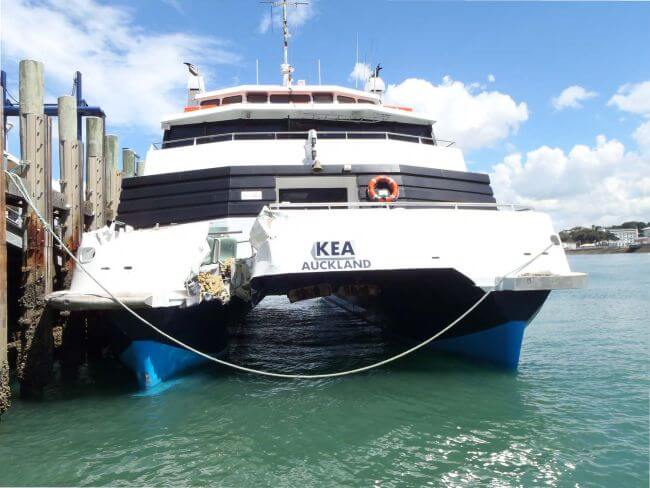 Maritime NZ Regional Compliance Manager, Northern, Neil Rowarth said while the company had identified problems with the vessel’s digital control system, it had failed to adequately manage the risk to ensure the safety of passengers and crew.

A new control system installed on the Kea in October 2104 was designed to allow the master to control the vessel from four separate stations on the bridge. Faults were identified with the system when transferring control between stations in the system’s automatic mode of operation.

Fullers continued to operate the Kea. To address the risks from the control system issues, Fullers implemented procedures which included switching off the control system’s automatic mode and operating it manually. However, this was inadequate to mitigate risks to passengers and crew, because allowing masters to transfer control between stations while the vessel was moving, increased the risk of an incident if the manual transfer process failed. Masters had previously experienced situations when control did not transfer properly between stations when the vessel was operating in manual mode.

On the day of the incident, the master attempted to transfer control between stations, as permitted under Fullers’ operating parameters. The transfer was unsuccessful and the master lost control of one of the vessel’s thrusters and it hit the wharf at a speed of approximately 13 km/h (7 knots).

Because bench seating on the main deck of the vessel was not secured, the impact with the wharf caused the seating to topple forward landing on some passengers.

At least 19 passengers were injured, ranging from cuts and bruises to a serious concussion.

“This sentence should send a strong message to industry that risks must be properly managed,” Mr Rowarth said.

“The company advised Maritime NZ that a procedure was in place to manage issues with the control system but this procedure was not sufficient to properly manage the risk. When the collision occurred, unsecured seating exacerbated the harm to passengers. The need to have adequately secured seating was especially important because of known problems with the control system.

“Paying passengers and crew working on board should feel safe in the knowledge that procedures are in place to manage risks and a vessel is in the right condition to operate safely. This was clearly not the case in this instance.”

After being detained by Maritime NZ after the incident, the Kea returned to service in July 2015 after inspection by a recognised surveyor.