Urgent ratification of international agreements designed to improve workers’ rights, inspections and enforcement is needed, the report says. Full transparency in the industry is also crucial to ending the cycle of abuse.

The report documents numerous cases of abuse, on vessels flying the flags of both developing and developed nations, from the EU and USA to Asia and South America. It includes recent investigations revealing serious abuses on vessels ranging from Taiwanese long-liners fishing far out at sea for high-value tuna, to desperate Vietnamese trawlers illegally entering Thai coastal waters because of the collapse of their own fisheries. 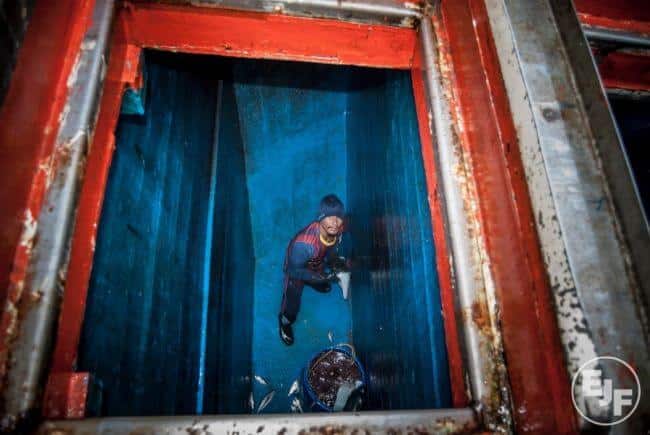 Human rights abuse aboard fishing vessels takes on several different faces, but Rahman’s* story is common to many. Rahman started out as a keen young Indonesian looking for opportunities to provide for his family. He spoke to a broker who promised him good wages aboard a Taiwanese fishing vessel. There were just one or two things to organise, the broker said, travel and documents, but that was no problem: he could pay any costs back at a later date.

Rahman was trafficked to the vessel. The living quarters were cramped and filthy, and he was forced to work 21-hour days. The captain regularly beat the crew, sometimes at gunpoint. He was not paid – constantly being told he needed to clear his debts – and when he spoke up to try and claim his wages, he was threatened with violence. He was forced to return home empty handed.

Ultimately, things could have been even worse for Rahman. He got out alive and without serious injury. Other crew working on Taiwanese vessels have suffered from serious injuries, sometimes fatal, due to a lack of safety equipment or proper medical attention. In an infamous case from 2015, an Indonesian worker even died after being beaten by his captain.

The trade in people

The vast majority of these abused fishers are migrants, often trafficked to the vessels via brokers who facilitate these abusive practices.

Undercover work in Thailand has shown how easily recently arrived migrants, commonly unable to speak Thai and unaware of labour laws and rights, can be exploited. Contracts are often written in Thai, meaning that workers cannot understand the terms and conditions.

This abuse of workers is part of a vicious cycle of abuse of the oceans. As unsustainable and often illegal fishing continues to drive steep declines in fish populations, income from fishing falls. To maintain profits, unscrupulous vessel owners seek to lower their costs through illegal fishing and forced, bonded and slave labour. This unmanaged and destructive exploitation of marine ecosystems causes fish populations to fall further – and the cycle continues.

Detailed evidence of this vicious cycle of abuse is presented in EJF’s interviews with fishers aboard Vietnamese vessels. Crew spoke of long hours, restricted access to food and water, and only receiving pay if the catch was good.

Crucially, they knew when they left port that they were headed to Thailand to fish illegally. There is no point in fishing in Vietnamese waters, they said, because there are no fish left. The Vietnamese fishing fleet is one of the largest in the world, and now stands at well over 100,000 vessels.

Corruption and poor governance continue to feed the problem, limiting effective management and enforcement of laws. However, it is the almost total absence of transparency in the global seafood industry that allows such harmful practices to flourish, the report asserts.

The lack of transparency enables illegal operators to create as much confusion as possible around their identities; escaping detection by changing vessel names; concealing vessel ownership; flying different flags to avoid detection; or removing ships from registers entirely.

Our report highlights profoundly concerning truths about the fishing industry globally, highlighting how illegal and unscrupulous operators are running operations based on the abuse of workers and the illegal and unsustainable exploitation of our oceans.

But it does not have to be this way. Adopting EJF’s Charter for Transparency would be transformative. Ten simple, logistically deliverable, low-cost measures, such as the publication of vessel licence lists and the unique identifying numbers for vessels – measures that are well within the reach of any country – would make it vastly easier to identify and act against the illegal operators, while rewarding legitimate, law-abiding businesses.

It is absolutely clear that gaps in workers’ rights, fishing regulations, and enforcement procedures need to be urgently addressed. It is equally clear that this process will be greatly aided if all countries ratify, implement and enforce international agreements such as the International Labour Organization’s Work in Fishing Convention (C188). Likewise, the case for aggressive action against the brokers who trick migrants, selling them to traffickers and into debt bondage, is both clear and compelling.