As part of KiwiRail’s commitment to greater sustainability the Interislander ferry Arahura is trialling Fuel Oil Emulsion (FOE) technology in one of the ship’s auxiliary engines. FOE burns more completely than unmodified fuel and so uses less fuel, emissions are lower and the engines run cooler and so should require less maintenance.

The technology is supplied by Blended Fuel Solutions NZ Ltd.

“The outcome looks as though it could reduce our use of fuel and the level of emissions as well as giving a significant financial saving. The trial is an example of the investment KiwiRail and the ship’s engineering staff are making in reducing the company’s use of fossil fuels,” said Malcom Sims the engineer in charge of the project.

“FOE has lower harmful emissions compared with normal fuels and this improves Health and Safety for those who have to work with it”. 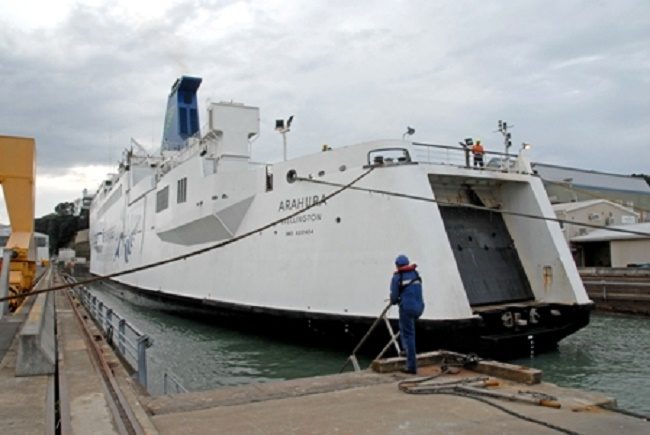 “The trial is over three months and follows a two day trial in 2013. This showed reduced fuel consumption and emissions, thus opening the way to this more extensive operational trial”.

“We are also exploring other alternative fuels such as biofuels, but none are yet as commercially advanced as the FOE technology. With the Arahura being retired at the end of July 2015, it provides a safe, known and reliable platform on which to conduct operational tests in a controlled manner.”

“From here Interislander will be analysing the data from the trials further with our partners. While these are still early days, there is definitely scope for potentially installing the technology across the fleet,” says Malcolm.

The trial is being supported by EECA under a “Technology Demonstration Project” grant. These grants aim to encourage the adoption of emerging energy efficiency and renewable technologies.

Leigh Ramsey, Managing Director of Blended Fuel Solutions NZ, says “KiwiRail/Interislander are a large liquid fuel user so it makes very good sense for it to be investigating these kinds of technologies.”

“With the introduction of the blend equipment on board the Interislander will also be able to test other alternative fuels.”

To Reduce Emissions, All Ships In Port Must Switch To Environmentally Friendly Energy Sources: Port Of Tallinn

Royal Caribbean International Celebrates ‘Spectrum Of The Seas’ Keel-Laying
Want to share your tips and advice? Got questions? Visit the community forum to ask questions, get answers, meet people, and share your tips!