Four ship-to-shore cranes at Oakland International Container Terminal (OICT), the busiest terminal at the Port of Oakland, are 27 feet taller following completion this week of a year-long, crane-raising project. The fourth and final raised crane went back into service yesterday and is ready to serve larger ships with containers stacked high above vessel decks. Oakland already works the biggest container ships that call North America. 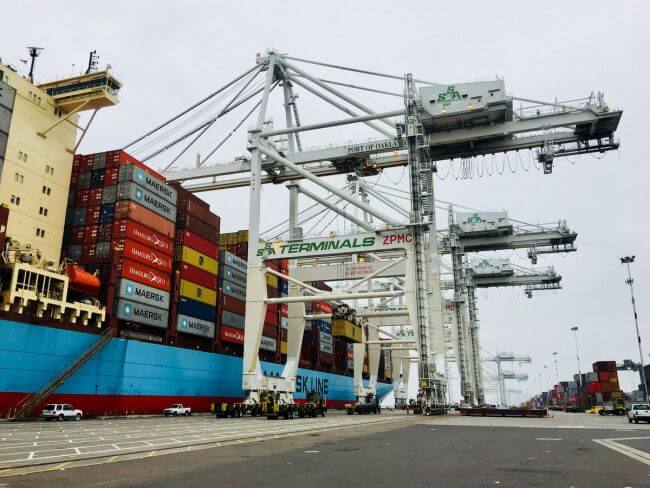 Stevedoring Services of America (SSA) operates OICT and managed the crane-raising project in partnership with the Port of Oakland.

“Taller cranes are critical for loading and unloading massive container ships that arrive at our marine terminal,” said SSA President Ed DeNike. “These huge cranes will help us move cargo more efficiently through the Oakland Seaport and support our operations for years to come.”

Raising four gantry cranes increased their lifting height from 115 feet to 142 feet above the dock. The work began May 8, 2017 and was completed this week. The giant cranes can soar up to 393 feet, the height of a 39-story building, with the booms in the highest position.

“Raising cranes is part of our infrastructure investment strategy to increase the Port of Oakland’s competitive edge on the US West Coast,” said Port of Oakland Maritime Director John Driscoll. “We’re confident that this will help us move more imports and exports through Oakland.” The crane-raising project cost approximately $14 million.

These higher gantry cranes can reach over an additional three levels of stacked containers on a big ship’s deck. This improves the process and speed of cargo operations, saving time and money for Port customers. Here’s how a container crane is raised:

Total container volume in Oakland was up 2.3 percent for the first half of 2018. The Port, in partnership with its terminal operators, anticipates heightening more cranes and adding new ones over the next few years.