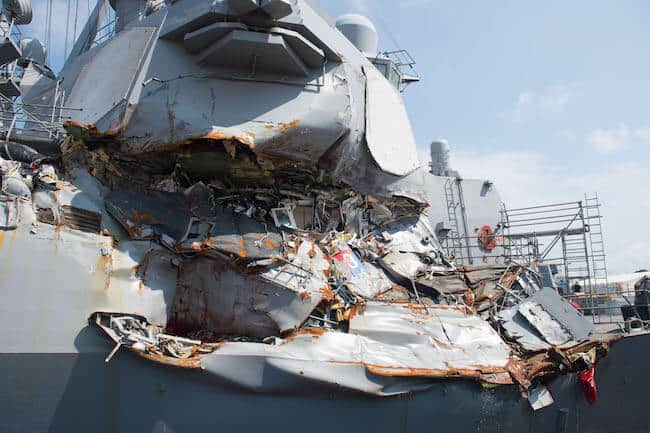 Cmdr. Alfredo J. Sanchez, former commander of USS John S. McCain (DDG-56), faces similar dereliction of duty, hazarding a vessel and negligent homicide charges for the Aug. 21 collision between the guided-missile destroyer and a chemical tanker off the coast of Singapore that resulted in the death of 10 sailors.

The individuals will have the charges preferred via Article 32 preliminary hearings soon, the statement said.

“The announcement of an Article 32 hearing and referral to a court-martial is not intended to and does not reflect a determination of guilt or innocence related to any offenses. All individuals alleged to have committed misconduct are entitled to a presumption of innocence,” the statement said.
“Additional administrative actions are being conducted for members of both crews including non-judicial punishment for four Fitzgerald and four John S. McCain crewmembers.”

A chief petty officer also faces a dereliction of duty charge that has already been preferred related to the McCain incident.

The charges are part of accountability actions recommended by an independent investigation tasked with reviewing further disciplinary actions by Navy leadership.

Director of Naval Reactors Adm. James F. Caldwell was appointed as the Consolidated Disposition Authority (CDA) for administrative and disciplinary actions related to the Fitzgerald and McCain collisions by Vice Chief of Naval Operations Adm. Bill Moran in late October.

Other actions include removing Vice Adm. Tom Rowden from his position as the head of naval surface forces earlier than his planned Feb. 2 retirement date.

Chief of Naval Operations Adm. John Richardson and Secretary of the Navy Richard V. Spencer are set to appear before the House Armed Services readiness and seapower and projection forces subcommittees on Thursday to testify on the two reviews conducted following the Western Pacific collisions. Richardson tasked U.S. Fleet Forces Command with leading a Comprehensive Review of Recent Surface Force Incidents, and Spencer directed a panel to lead a Strategic Readiness Review.

To date, the Navy has removed the commanding officers and executive officers of both McCain and Fitzgerald; Capt. Jeffery Bennett, commodore of the Japan-based Destroyer Squadron 15 to which both ships belonged; the Japan-based task force commander, Rear Adm. Charles Williams; and the commander of U.S. 7th Fleet, Vice Adm. Joseph Aucoin.