Energy efficiency, flexibility and optimised space availability will be built into the new Wasaline ferry that will transform freight and passenger connections between Umeå in Sweden and Vaasa in Finland, according to naval architect and design engineering consultant Foreship. 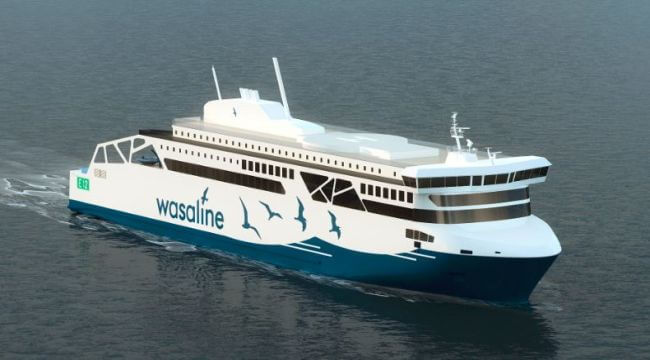 Last week, Kvarken Link converted a letter of intent with Finnish builder Rauma Marine Constructions into a firm contract to construct the Super 1A Ice Class ferry by 2021, with capacity for 1,500 lane metres of freight and 800 passengers. The agreement will deliver the state-ofthe art ship best able to sustain the ‘Kvarken Link’, the regional connection supported jointly by city authorities in Vaasa and Umeå.

“The Vaasa-Umeå route is vital for freight and passengers”, according to Lauri Haavisto, Managing Director, Foreship but it creates specific flexibility, stability and efficiency challenges for the ship designer. The ferry needs to maximise lane metres to support freight growth in what is the shortest link between Sweden and Finland but also navigate independently in the challenging ice conditions, while the turning circles in both ports are restricted. Again, depth variations along the four hour transit include shallow stretches, demanding flexibility in machinery performance to maintain schedule.”

Foreship has acted as consultants throughout the ferry development process, working closely with the owner’s team from the outset to deliver the concept design, the initial General Arrangement, inquiry specification and machinery concepts. In addition, Foreship has also acted as technical advisor in the public procurement process.
The ship will feature dual fuel main engines running mainly on liquefied natural gas with the option to burn biogas. In addition, the Wasaline ferry will also include battery power, reducing its overall environmental footprint either by operating with zero emissions in-port or by meeting peak load demands more efficiently at sea.

“Foreship Ltd congratulates Wasaline for entering into the ferry newbuilding contract and would like to express its thanks for being given the opportunity to offer its design, specification and procurement knowledge. We look forward to providing further support as this project moves into the execution phase,” says Haavisto.