The recently introduced Wärtsilä 31 engine, which has been acknowledged by Guinness World Records as being the world’s most efficient 4-stroke diesel engine, has been selected to power a state-of-the-art new generation icebreaker currently under construction at the PJSC Vyborg Shipyard. The ship is being built on behalf of FSUE Atomflot, the enterprise of ROSATOM, the State Corporation for Atomic Energy. The order was signed in September.

When delivered, the icebreaker will serve the Yamal LNG project in Sabetta, located northeast of the Yamal peninsular in Russia. The project is one of the largest industrial undertakings in the Arctic. Fuel efficiency and reliability were the two major deciding factors behind the choice of the Wärtsilä 31 engine. Other key considerations in the decision process were the engine’s operational flexibility and its outstanding performance in extreme environmental conditions. The new vessel will operate in temperatures as low as minus 50°C. 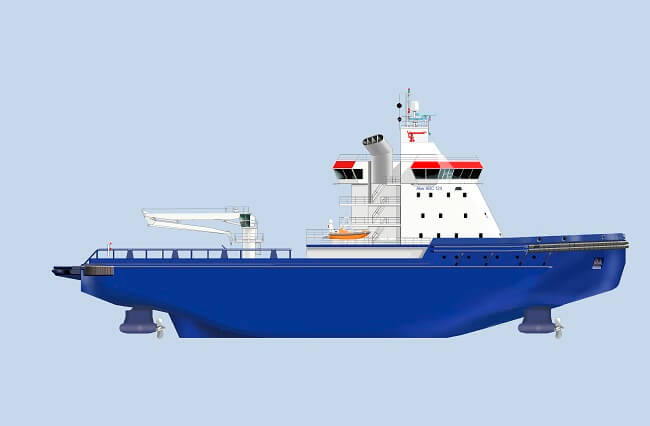 The new generation icebreaker Aker ARC 124 will feature three 8-cylinder Wärtsilä 31 engines. The installation will also include Wärtsilä’s online monitoring of the engines, thereby enabling their operating condition to be closely followed remotely. An additional characteristic of the newly introduced vessel is that it will feature a totally new approach to maintenance. The first major service required by the Wärtsilä 31 comes only after 8000 running hours (compared to 2000 running hours for engines of a similar class), thus making the Wärtsilä 31 a clear leader in this field. This dramatic improvement reduces maintenance costs to a previously unattainably low level, as well as greatly increasing the vessel’s uptime availability.

“When the Wärtsilä 31 engine was introduced in June, a new approach to marine power generation was launched. By combining a drastic reduction in fuel consumption, increased power output, and a four-fold extension of normal maintenance intervals, our customers now have the chance to redefine how they operate their vessels to a new level of competitiveness. FSUE Atomflot’s selection of the Wärtsilä 31 engine after such a short time following its introduction, confirms the value that this engine brings to the market,” says Roger Holm, Senior Vice President, Engines, Wärtsilä Marine Solutions.

“We are confident that this project will be a success because of Wärtsilä’s credibility in the industry, and the positive experience from our long established partnership with this solutions provider. High vessel availability and fuel efficiency are the key winning factors for any ship owner. The Wärtsilä 31 engines will facilitate a significant improvement in vessel operations, making it extremely competitive on the market. This new icebreaker, powered by Wärtsilä 31 engines, will be the most technologically advanced ship of its kind in the whole world,” noted FSUE Atomflot First Deputy Director General – Chief Engineer Mustafa Kashka.

“We are extremely proud to have the opportunity to realize a project involving the newest and most modern domestic icebreaker. This vessel harmoniously combines the operating flexibility and efficiency of the power plant, with high safety standards and good ergonomics of the ship’s equipment. Despite the fact that the Vyborg shipyard has already had orders for six icebreakers, we are confident that this icebreaker, the Aker Arc124 will rightly take its place among the most efficient modern domestic vessels operating in Arctic waters,” says Alexander Solovyev, General Director of PJSC Vyborg Shipyard.

The Wärtsilä 31 is the first of a new generation of medium speed engines, designed to set a new benchmark in efficiency and overall emissions performance. It is available in 8 to 16 cylinder configurations and has a power output ranging from 4.2 to 9.8 MW, at 720 and 750 rpm. This 4-stroke engine has the best fuel economy of any engine in its class. At the same time, it maintains outstanding performance across the complete operating range. Its modular design enables a significant reduction in maintenance time and costs, thereby improving power availability and reducing the need for parts.