On Tuesday, 9 August – the bunkering (taking on fuel) of the Ternsund was initiated. It is the first sea-going vessel to bunker LNG (liquefied natural gas) in Rotterdam. As a result the brand new product tanker of the Swedish shipping company Terntank receives the first Rotterdam ‘LNG bunkering incentive’; a premium amounting to a discount of ten percent on the seaport dues.

On Sunday, the Ternsund arrived for the first time in Rotterdam to unload naphtha and gas oil at Vopak in the Botlek. Monday afternoon, the ship was shifted to the former home terminal of the ECT terminal at the Willem Alexanderhaven. This is where the bunkering will take place. First, the temperature of the fuel tank was ‘cooled down’; from ambient temperature to operating temperature. With the aid of nitrogen, the temperature was reduced from +20 °C to -162 °C in eighteen hours. Then the actual bunkering of Shell LNG started. To this end, trucks drive between the Eemhaven and the Gate terminal (property of Vopak and Gasunie) on the Maasvlakte. The bunkering of the cleaner fuel will be completed on Wednesday morning. The vessel will then continue to Gothenburg.
Next year, the Port Authority will welcome a new bunker vessel which Shell will use to supply sea-going vessels with LNG from the water. 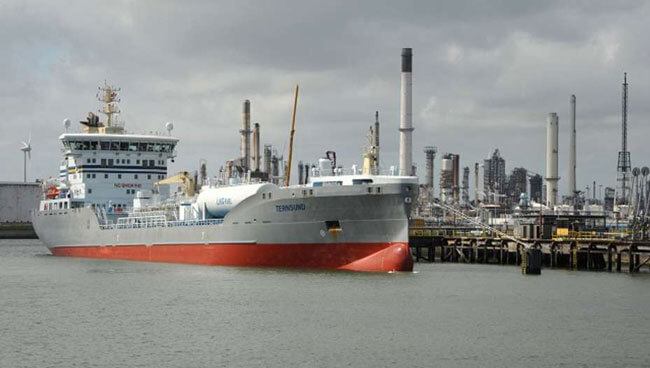 The Port of Rotterdam Authority is pleased that the first sea-going vessel is being bunkered with LNG (liquefied natural gas) in Rotterdam. The Port of Rotterdam Authority strives to turn the port into a major European LNG hub and promotes the transition from fuel oil to the much cleaner LNG as fuel for shipping. By using LNG, inland vessels, coasters, ferries and heavy transport reduce carbon dioxide (CO2) emissions up to 20 percent and nitrogen oxide (NOx) emissions up to 85 percent. Sulphur and particulate matter emissions are reduced to practically zero. This is an important reason for the Port of Rotterdam Authority to encourage the use of LNG.
In the meantime, the Port Authority expects possible other sea-going vessels in Rotterdam to bunker LNG. The cost for the cleaner fuel is some 20 percent lower than elsewhere, and moreover, Rotterdam offers various incentives. The Environmental Ship Index and the LNG Bunkering Incentive each offer a premium worth 10 percent of the seaport dues.