You are here: Home › Shipping News › First Ocean Vessel Of 2017 Arrives At Port Of Indiana
TwitterFacebookLinkedInPinterestBuffer

The first ocean vessel of the year arrived today at the Port of Indiana-Burns Harbor marking the official opening of the international shipping season. Port officials welcomed the 413-foot general cargo carrier BBC Mont Blanc and presented the captain with the Ports of Indiana “Steel Stein.”

“The arrival of the first ocean ship of the new year is an exciting time not only for our port, but also for our port companies and numerous other regional businesses that rely on the cargoes these vessels carry,” said Port Director Ian Hirt. “For northwest Indiana, the opening of the St. Lawrence Seaway each spring is always a symbol of optimism because it reestablishes a direct connection to global markets and new business opportunities.” 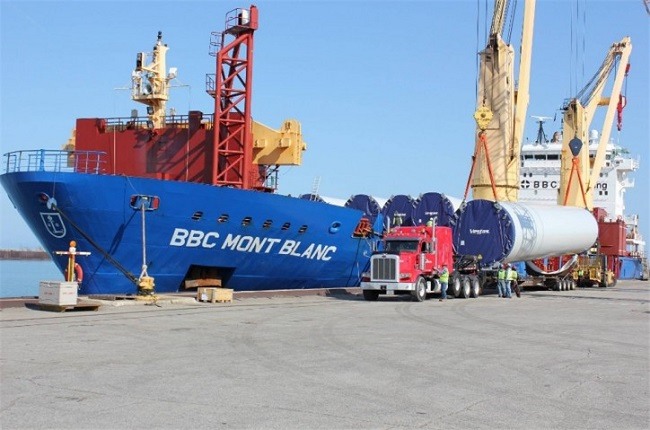 Nearly 900 tons of wind turbine tower sections shipped from Marin, Spain, will be unloaded from the Mont Blanc by port stevedore Federal Marine Terminals, the premier handler of break bulk cargoes on the Great Lakes. Thirty workers from the International Longshoremen’s Assoc. and International Union of Operating Engineers will use two days to unload the 20 components that are destined for a wind farm in Illinois.

Built in 2011, the Mont Blanc is flagged to Antigua and Barbuda, a twin-island country between the Caribbean Sea and the Atlantic Ocean. The crew of 15 is led by Captain Nikolay Gombalevsky, a native of Russia. The ship is owned by the German shipping company Bresie Schiffahrts Gmgh & Co KG. After workers finish unloading its cargo, the ship will travel to Thunder Bay, Ontario, where it will discharge a large transformer and related components.

As part of the annual tradition, Hirt presented Captain Gombalevsky with the “Steel Stein,” which commemorates northwest Indiana’s identity as the “steel capital of North America.” The northwest Indiana port is recognized as one of the top steel ports in the country for inbound and outbound shipments of steel-related products, and is also home to many companies that provide critical metal services. The port is home to 15 steel-related companies and has 110 acres available for future growth.

The port’s ability to handle heavy-lift and large-dimensional cargoes—known as project cargoes—is well established and shipments were up nearly 25 percent in 2016. Maritime operations at the Port of Indiana-Burns Harbor generate nearly $4.9 billion per year in economic activity and support more than 39,000 total jobs. The port handled nearly 2.6 million tons of cargo in 2016 completing the highest three-year total in the port’s history.

The St. Lawrence Seaway opened its locks to ocean vessels for the 59th navigation season on March 20 after closing in late December. According to St. Lawrence Seaway Development Corp. Deputy Administrator Craig Middlebrook, last year was one of the safest navigation seasons on record and he expects the same this year. “Combined with a lock availability rate of nearly 100 percent over the last 10 years, the safety, reliability, and performance record of the Seaway System is second to none and gives our customers the confidence to know that we can meet their transportation needs.”