On the morning of 2 January 2017, Sif loaded its first monopile on board a sea-going vessel. The ship in question is the Innovation, a heavy-lift jack-up vessel owned by Geosea, part of the Belgian DEME Group. It was also the first job handled at the new section of Maasvlakte 2’s deep-sea quay (port number 8317).

Monopiles are used for the foundations of offshore wind turbines. They can weigh over 1,000 tonnes a piece. All in all, four monopiles were loaded for transport. Together with the so-called ‘transition pieces’: connecting sections that are used to join the turbine towers to the monopiles. The Innovation left the quay the same night, en route to a wind farm off the coast of the United Kingdom where it will be installing the monopiles. 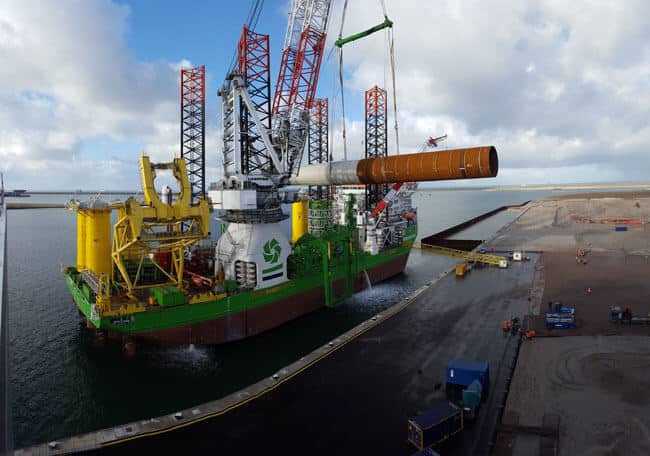 This operation will be followed by a number of similar transports over the next few weeks. Members of the public can witness the activities of the Sif Group up-close during one of the boat tours departing from FutureLand, the Port of Rotterdam Authority’s information centre at the Maasvlakte.

In the summer of 2015, the listed steel construction company Sif Group started on the rapid development of a new location for its Monopiles business unit at a 42-ha site on Maasvlakte 2. It has since taken its colossal assembly and coating hall into use. Sif is presently completing two monopiles to a maximum length of 80 metres per week. Work on the industrial site is expected to be finalised by July 2017.

The Innovation was taken into service just under five years ago. It has a powerful 1,500-tonne crane and a loading capacity of up to 8,000 tonnes. The heavy-lift jack-up vessels can transport and install 120-metre tall wind turbines with a rated capacity of 6 MW+, as well as heavy foundations in water depths of up to 65 metres. The Innovation is entirely self-sufficient thanks to its all-in-one loading, transport and installation solution.