Recently the Jose Duarte started its first mining job in Lisbon. The trailing suction hopper dredger has been built in Portugal for a Portuguese dredging company, to a Spanish design and using Dutch dredging equipment. The European cooperation has resulted in a customised dredger performing above expectations on her first job. 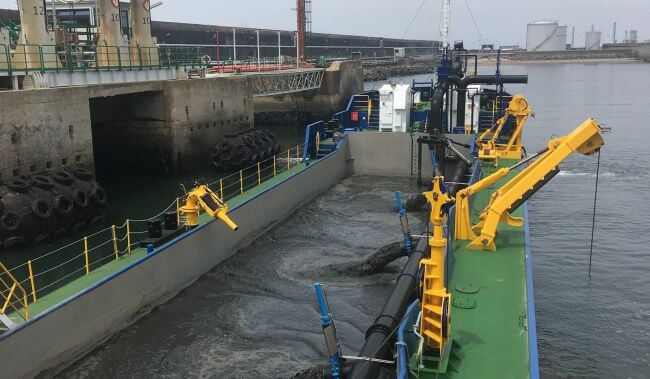 Portugal has a long coastline and a number of busy navigable rivers – an excellent backdrop for the dredging company Inersel. When Inersel required addition to its fleet, its preference was to acquire it within its home country. As a result, the company formed a team with West-Sea, an all-around shipyard in the north of Portugal. Carceller, an experienced naval architect located just across the Spanish border, carried out the design of the split hopper dredger. The dredging equipment was sourced from Damen Dredging Equipment in the Netherlands.

This successful international cooperation has resulted in the delivery of a 1,045m3 split hopper dredger, 73 metres long and with a beam of 11.4 metres. The hopper dredger has been fitted out with a Ø500 millimetre trailing suction pipe, which can work using various configurations. As the dredging depth can reach up to 40 metres, the trailing pipe can be lengthened and the gantries and winches relocated in the gangway to optimise performance for each dredging job. 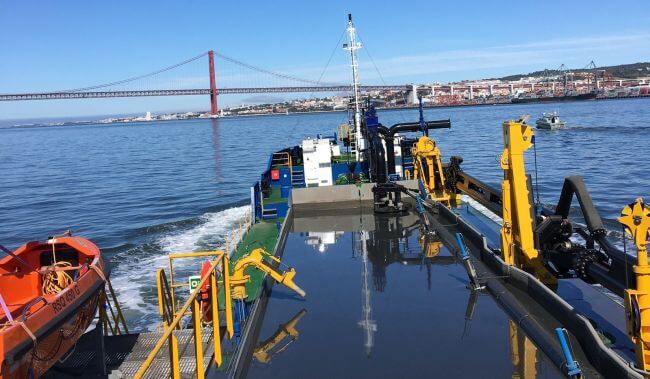 The split hopper has been designed with a wide array of dredging assignments in mind. The in-board Damen dredge pump type BP5045MD can both deliver spoil to the hopper hold and empty the hold by pumping the cargo ashore via a bow coupling unit. The hopper is fitted with two overflows to optimise the loading performance, and the loading process is monitored by dedicated dredging instrumentation.

The Jose Duarte began dredging as soon as she left the yard, on a maintenance job nearby. To boost her efficiency in maintenance jobs, she has a degassing system on board. That assignment plus some mining contracts near Lisbon have demonstrated the value that the Jose Duarte has on offer – a worthy addition to the Portuguese dredging fleet.