Gaz Métro applauds today’s official commissioning of the NM F.‑A. Gauthier, the first ferry to run on liquefied natural gas (LNG) in North America. It is also the first ship of any kind to run on LNG in Canada. By choosing natural gas as the fuel for its new admiral-ship, the Société des traversiers du Québec is reaching an important milestone in the Québec maritime transport sector and paving the way for local shipowners to use a proven, high-performance and cleaner technology. The use of liquefied natural gas makes it possible to reduce greenhouse gas emissions by up to 25%, compared with marine diesel, in addition to almost completely eliminating fine particle emissions and other air pollutants. LNG motors are also quieter and produce less vibration, which is more respectful of marine life.

LNG motors are a proven technology widely used for many years in road and maritime transport worldwide, particularly in Europe. “It’s extraordinary that this major first is happening here in Québec, and Gaz Métro is very proud to be a part of it,” highlighted Martin Imbleau, Vice President, Development and Renewable Energies at Gaz Métro. “In support of Québec’s Maritime Strategy, LNG is a concrete solution for fighting climate change and allows local shipowners to comply with the increasingly stringent standards regarding polluting emissions on North America’s waterways.” 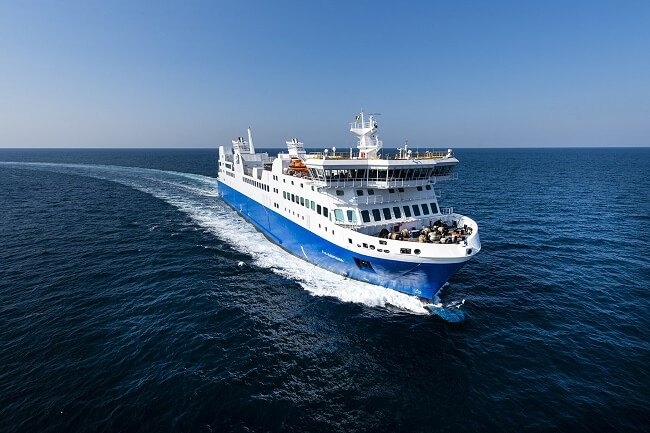 Following an agreement concluded in 2013, Gaz Métro, through its subsidiary Gaz Métro LNG L.P., was chosen as the LNG supplier to fuel three new Société des traversiers du Québec ferries, including the NM F.‑A.‑Gauthier. Today this ship is replacing the NM Camille‑Marcoux for the Matane–Baie‑Comeau–Godbout ferry service. The two other ships will be assigned to the Tadoussac–Baie‑Sainte‑Catherine crossing.

Natural gas becomes liquid when it is cooled to -162 °C. LNG takes up 600 times less space than natural gas in its gaseous state, which is a very significant advantage for storage and transport by tanker truck or by ship. Gaz Métro has been liquefying natural gas since 1969 at its plant in Montréal East. Originally used to meet strong energy demand during peak periods, today LNG is used as a cleaner fuel.

TSB: Inadequate Maintenance And Voyage Planning Led To January 2017 Grounding Of Arca 1
Want to share your tips and advice? Got questions? Visit the community forum to ask questions, get answers, meet people, and share your tips!