The ceremony was attended, among others, for the ship owner by the President Richard Meadows, while Fincantieri was represented by the Director of the Genoa Sestri Ponente shipyard Paolo Capobianco. 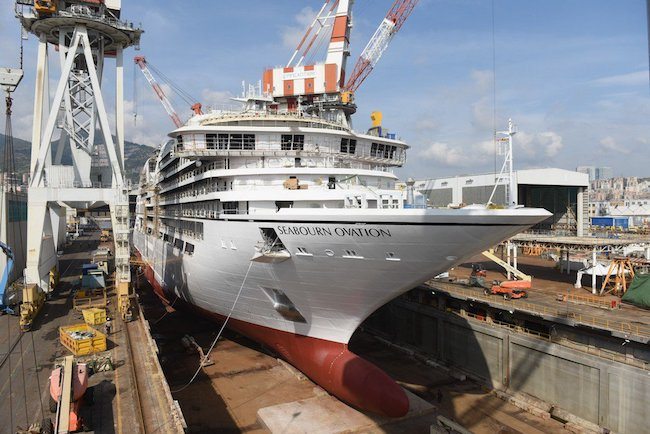 “Seabourn Ovation”, due to join the Seabourn fleet in spring 2018, will feature modern design elements and innovations and will be built according to the standards and cutting-edge technical solutions that make Seabourn one of the most prestigious brands in the ultra-luxury segment, continuing the fleet modernization started in 2009. Her sister ship, “Seabourn Encore”, was delivered by Fincantieri at the end of 2016 at the Marghera shipyard (Venice).

The ship will be 40,350 gross tons, 210 metres long and 28 metres wide and will be able to reach a cruising speed of 18.6 knots. It will carry up to just 600 guests, based on double occupancy. Every suite will feature a private veranda.

“Seabourn Ovation”, as its sister ship, is a particularly innovative project, focused on energy optimisation and minimum environmental impact. The ship will be built using the very latest technologies, whose standards exceed the requirements of the relevant regulation.

Fincantieri has built 78 cruise ships from 1990 to today (55 since 2002), 63 of which for Carnival’s different brands, while other 31 are currently being designed or built in the Group’s yards and 8 of these are for the shipowners of the American group.