The submarine “Romeo Romei” was delivered today at Fincantieri’s shipyard of Muggiano (La Spezia). It is the last of the four U212A “Todaro” class twin units ordered to Fincantieri by the Naval Armament Unit – NAVARM for the Italian Navy.

The submarine “Romeo Romei”, as its twin unit “Pietro Venuti” delivered last July at the Muggiano shipyard, features highly innovative technological solutions. It is entirely built with amagnetic material, using the most modern silencing techniques to reduce its acoustic signature. 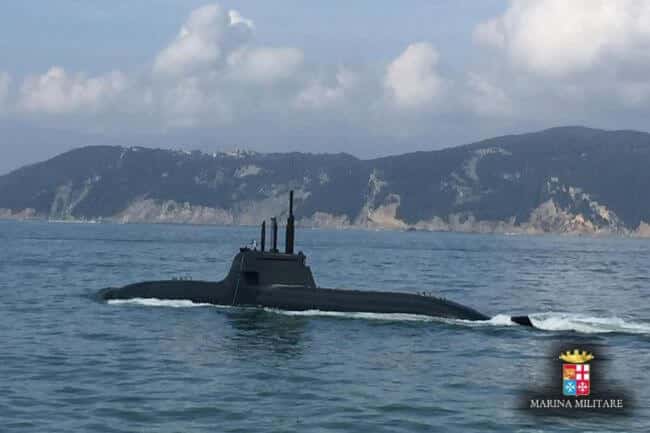 “Romei” has a surface displacement of 1,509 tonnes, an overall length of 55.9 meters, a maximum diameter of 7 meters, and can exceed 16 knots underwater. It has a 27-person crew.

The “Romei” is the 102nd submarine built in the shipyard of Muggiano since 1907, when the Italian Royal Navy’s “Foca” submarine was launched. Since then, this shipyard has always stood out for building naval units, not only for the Italian Navy, but also for foreign navies (Brazil, Spain, Portugal, Sweden, Denmark).

The building programme of the submarines “Venuti” and “Romei” is the continuation of the project launched in 1994 in cooperation with the German Submarine Consortium, which has already led to the construction in the past years of six units for Germany and two for Italy – the “Todaro” and the “Scirè”. These latter units, delivered by Fincantieri in 2006 and 2007 respectively, are operating successfully as part of the Italian Navy’s fleet.

Like the other vessels in the series, the “Romei” is equipped with a silent propulsion system based on fuel cell technology, producing energy through an oxygen-hydrogen reaction independently from external oxygen, ensuring a considerably higher autonomy in submersion than the conventional battery-based systems. It features an electro-acoustic system which is fully integrated into the command and control system, as well as a modern automation system of the control platform.

Romeo Romei was born in Castelnuovo (Cattaro) on August 14th, 1906. Student at the Naval Academy of Livorno since December 1924, in 1928 he was appointed midshipman, passing to Sub-Lieutenant on July 1st, 1929, while he was embarked as navigating officer on the cruiser “Trieste”. Promoted to Lieutenant in 1933, he requested to pass on submarines and commanded the Perla, participating in special missions during the Spanish Civil War.

He was called back home from the naval base in Tobruk on June 10th, 1940 with the declaration of War, taking the lead of the submarine Pier Capponi and standing out for audacious and successful combat missions, so much to be defined the “abysses corsair”. In a war mission led on November 10th, 1940 in the Strait of Sicily (50 miles SE from Malta), he attacked a British naval formation – consisting of an aircraft carrier and two battleships convoyed by several destroyers – probably heavily hitting a battleship.

On March 31st, 1941, the unit left Messina for a mission, heading towards the central Mediterranean Sea. It was torpedoed by the British submarine Rorqual, sinking about 17 miles south of Stromboli. Among the crew there were no survivors.