“Viking Jupiter”, the sixth cruise ship which Fincantieri built for Viking, has been delivered at the shipyard in Ancona.

“Viking Jupiter”, as its sister ships, belongs to the small cruise ship segment; with a gross tonnage of about 47,800 tons, it has 465 cabins with accommodation for 930 passengers.

The ship has been designed by experienced naval architects and engineers, including an interior design team of London-based SMC Design, and Los Angeles-based Rottet Studios, who gave the “Viking Jupiter” a modern design of Scandinavian inspiration, characterized by sophisticated yet functional elegance. 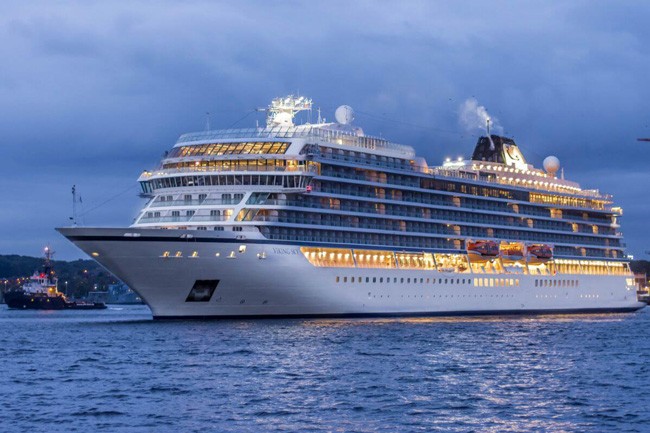 In addition to the all-veranda staterooms, the ship also features spacious suites with sweeping views, two pools, of which one Infinity Pool off the stern, and a Spa designed according to the wellness philosophy of the Scandinavian tradition, with a sauna and a snow grotto.

The Viking units are all built according to the latest navigation regulations and equipped with the most modern safety systems, including the “Safe return to port”. Furthermore, they feature high-efficiency engines, hydro-dynamics and hull optimized for maximum fuel efficiency and equipment that minimizes exhaust pollution and meets the strictest environmental regulations.

Fincantieri started its partnership with Viking in 2012, trusting the shipowner which was entering the ocean cruise market as a startup. Today, the cooperation, which first began with an order of two ships, has reached a total of 16 units. This is an all-time record, the largest number of ships built by a shipyard for one sole shipowner.

The first of the series, “Viking Star”, has been built at the shipyard in Marghera and delivered in 2015. The other units, “Viking Sea”, “Viking Sky”, “Viking Sun”, and “Viking Orion”, handed over in 2016, 2017 and 2018, were all built at the Ancona yard, as well as “Viking Jupiter”, which joined the shipowner’s fleet just today. Other 10 units, options included, for Viking Cruises will take to the sea from the Group’s Italian yards between 2021 and 2027. Furthermore, Vard, together with Fincantieri, is also specializing in the construction of expedition vessels. In this context, the company has acquired the order from Viking for 2 special cruise ships which will be built in the Group’s yards.

Fincantieri has built 88 cruise ships from 1990 to today (65 from 2002), while other 55 are currently being designed or built in the Group’s yards.