BC Ferries’ Salish Raven, the third and final Salish Class vessel, is on its way. The vessel departed Gdansk, Poland on morning of 28th April, for a 10,440 nautical mile journey bound for its new home in British Columbia.

The Transatlantic voyage will take approximately 45 to 55 days, depending on weather. The journey will include stops for refuelling in Santa Cruz, Canary Islands and Panama City, Panama. The vessel will also transit the Panama Canal and sail up the west coast of North America to British Columbia. 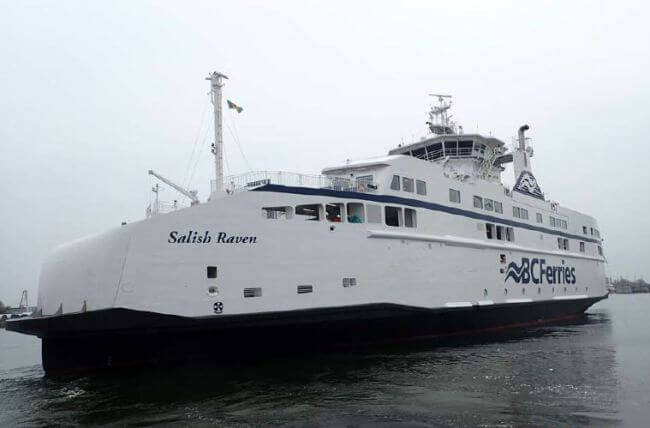 For those who want to join the voyage “virtually”, customers can track the ship’s progress including course, position and speed at vesselfinder.com.

“This is a major milestone in our newbuild program as Salish Raven, the final vessel in this series, is now making its way to British Columbia,” said Mark Collins, BC Ferries’ President and CEO. “With these new vessels, we continue to move towards standardization of our fleet, which offers interoperability and lower crew training and maintenance costs, and also enhances safety.”

The artwork created to adorn Salish Raven, designed by Musqueam Nation’s Thomas Cannell, will be applied on the ship when it arrives in B.C. The design was revealed on February 9, 2017 and can be viewed here. The winter weather in Poland has temperatures below ideal for the application.

BC Ferries will take final acceptance and ownership of Salish Raven upon final inspection once the vessel arrives in B.C. Remontowa Shipbuilding S.A. is responsible to deliver the ship to B.C. and has contracted with a professional international ship delivery specialist. Some of BC Ferries’ crew members are on various legs of the voyage for training and familiarization.

Stena Offers Stena Saga As Hospital Ship With Space For 520 Patients
Ammonia Fuel Cells For Deep-Sea Shipping – A Key Piece In The Zero Emission Puzzle
Want to share your tips and advice? Got questions? Visit the community forum to ask questions, get answers, meet people, and share your tips!