Authorities in Indonesia have reportedly detained the captain of a ferry that caught fire on New Year’s Day off the coast of Jakarta, leaving at least 23 people dead.

The Zahro Express ferry was en route from Jakarta’a port of Muara Angke to the resort island Tidung when it met with the accident. Reports suggested different numbers of passengers onboard the ferry, citing various sources. 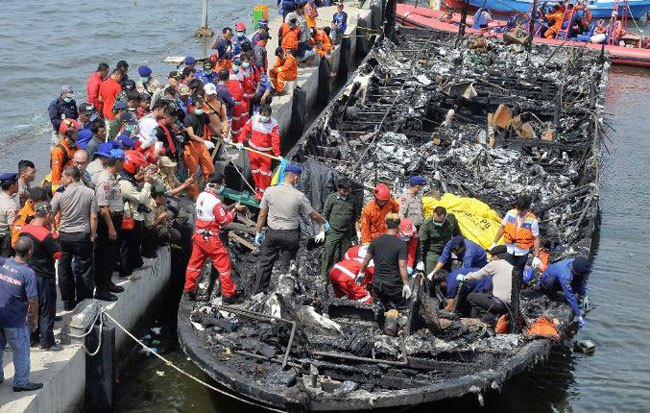 Indonesia’s search-and-rescue agency reportedly said that 224 people were rescued from the ferry, while media reports also suggested the authorities are still searching for 17 people missing.

The cause of the blaze has not been confirmed, but officials indicated that the initial evidences suggest negligence and operating an unseaworthy vessel were the reasons behind the incident, The Wall Street Journal reported. Reports also said the ferry was carrying less number of life jackets at the time of accident.

Reacting to the news that the captain abandoned ship as passengers struggled to escape, Antonius Tonny Budiono, director general for sea transportation at the Indonesian ministry of transport, said that a captain who abandons ship first is no captain at all.

Adding that a captain should be leaving the vessel only after all the passengers have been evacuated, Budiono said the captain of Zahro Express ferry would face sanctions including the revocation of his sailing permit.

In addition, Budiono assured the dismissal of the port’s harbormaster citing the lack of clarity in the number of passengers onboard.

Maritime accidents are not new to Indonesia, a sprawling archipelago in Southeast Asia with poor maritime safety, which relies heavily on boats to ferry people round its 17,000 islands.

Watch: 21 Injured In Fire Onboard US Navy Ship In San Diego