The eyeWitness to Atrocities app has won the Geneva Centre for Security Policy (GCSP) Prize for Innovation in Global Security – established to ‘recognise deserving individuals or organisations that have an innovative approach to addressing international security challenges’ and that demonstrate ‘excellence in new ideas.’ Only the second to be awarded, the prize was presented to eyeWitness Project Director Wendy Betts during a ceremony held in Geneva, Switzerland on 17 November 2016.

Ms Betts, accompanied to the event by the app’s innovator, Dr Mark Ellis, Executive Director of the International Bar Association, said in her acceptance speech: ‘It is a great privilege to accept this award on behalf of the entire team… The eyeWitness app is really Mark’s brainchild and it is only with the support of the International Bar Association that we were able to bring this project to fruition.’ She went on to describe the chief goal of the eyeWitness app as being a tool to aid in holding to account culprits of ‘unspeakable’ crimes. 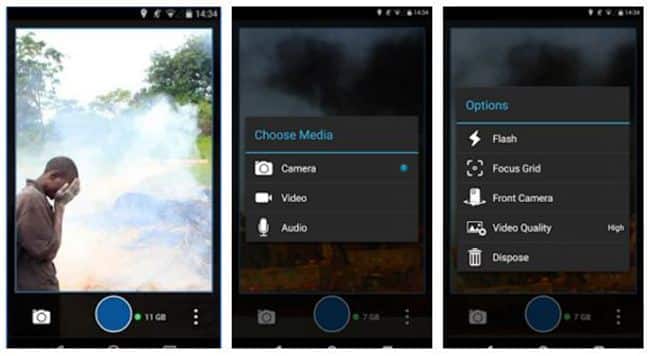 Ms Betts explained how, in the developmental stages of the app, consultations were held with courts and activists to bridge the gap between both sets of actors. In reference to the activists, she said the aim was ‘to empower these courageous individuals who are on the ground capturing and sharing this information about crimes… by giving them a tool to do so in a way that can not only raise awareness of these events but also help them to seek justice and to hold the perpetrators responsible.’

She concluded her remarks to the distinguished audience with the statement: ‘It is only through justice and accountability that societies in conflict can move forward towards a sustainable peace. Thank you to the Geneva Centre for Security Policy for not only this award, but for also sharing and supporting our vision.’

The eyeWitness project and its Android app were selected out of 144 candidates on the basis of the project’s creativity and originality, in the pursuit of preserving human dignity, security, justice and peace. Submissions from organisations, academics, entrepreneurs and others were received by GCSP from more than fifty countries on six continents. The entries were evaluated by a panel of judges with backgrounds well-suited to the prize’s wide-ranging scope and emphasis on innovation, comprising (in alphabetical order):

Included on the panel from GCSP were:

Dr Ellis commented: ‘I echo Wendy’s sentiments and also thank GCSP for recognising and supporting the work of the eyeWitness to Atrocities Project.’ He added: ‘Since its launch in 2015, eyeWitness has reached more than 130 countries on six continents. Today, the project has established relationships with organisations working in some of the most dangerous parts of the world to document ongoing violations. By training these groups on how to maximise the impact of their work, eyeWitness believes that it not only promotes the rule of law via an accessible mobile app but that it also contributes to a collective future that is more inclusive, fair and just. The GCSP, by extension, is also a contributor to this ideal.’