The newly expanded Gwadar deep-water port in Pakistan that is key to a planned $46 billion Chinese economic corridor is nearly complete and expects to process about a million tons of cargo next year, the operator said on Tuesday.

Most of the cargo will be incoming construction materials to be used in projects related to the China Pakistan Economic Corridor (CPEC), which envisions linking far-western Chinese production regions by road through Pakistan for shipment through Gwadar port to overseas markets.

Gwadar is in Baluchistan province where separatist groups in have waged a violent campaign for decades, saying the Pakistani state has failed to develop the impoverished region and instead plundered its natural resources.

Pakistani security forces have promised to protect the corridor project.

“The port cranes are almost ready, and we are thinking that the port will be (at) full operation by the end of this year,” said Zhang Baozhong, chairman and CEO of China Overseas Ports Holding Company Ltd. 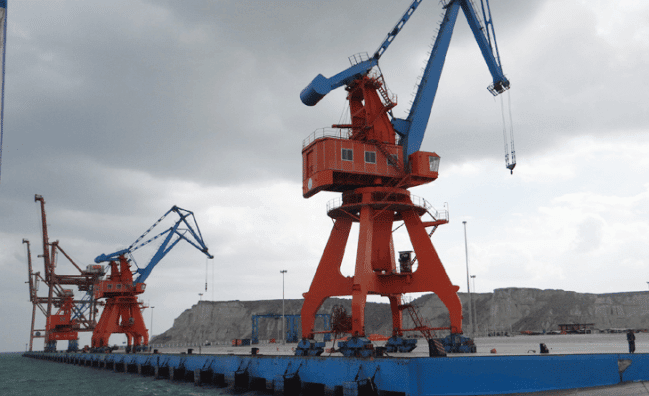 The Chinese company took over Gwadar’s operations in 2013. The revamped port has three multipurpose berths and its inner is dredged to 11.5 metres.

“We’re expecting at least one million tons of material will go in and out” next year, Zhang said, speaking at a day-long conference in Gwadar city.

The projected traffic represents a 100 percent increase over this year’s throughput, but is a far cry from the 300-400 million tons per year that the Gwadar Port Authority envisions for the facility, which has ambitions of becoming a regional hub.

Part of the problem is that the new roads that CPEC is expected to build, linking the port to China’s industrial zones, have not yet come online and the Pakistani province of Baluchistan does not have enough export-ready products.

“Even if you have a very good port, (if) you don’t have an inland transporting system and the economy in the near area is not very positive, the port will not be fully utilised,” he said.

He added that his company planned to develop seafood processing plants and other facilities in a 923 hectare free zone outside the port.

One of Gwadar’s main industries is fishing but it is not done on a scale that is suitable for export.