This week, Evergreen Line’s Ever Sigma container ship discharged the 9 millionth TEU (twenty-foot equivalent unit) to pass through the Port of Los Angeles in the span of 12 months, setting a new annual record for the most container throughput of any port in the western hemisphere.

“Nine million TEUs is a major milestone for Los Angeles, and it’s only fitting that Evergreen Line, a longstanding customer, discharged the box that set this new Western Hemisphere record,” said Port Executive Director Gene Seroka. “Their operation in Los Angeles is an example of how our customers and supply chain partners are continually adapting to the changing dynamics in the marketplace.” 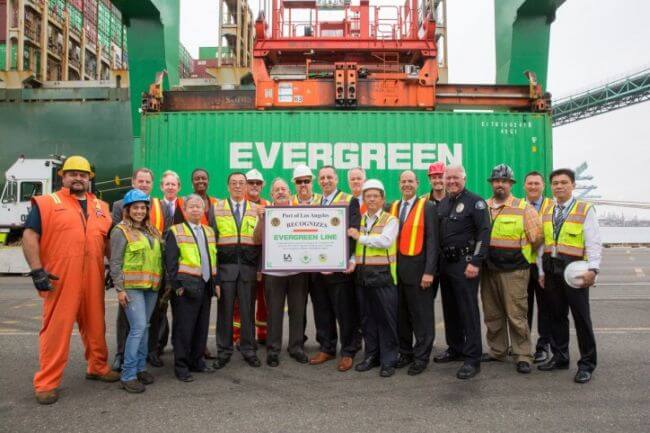 “As a Port of Los Angeles tenant and partner for more than 50 years, Evergreen is proud to be the shipping line that delivered the 9 millionth TEU during this 12-month period,” said Evergreen, Roy Amalfitano, Vice Chairman of Evergreen Shipping Agency (America) Corporation. “Congratulations to everyone involved, including captain and crew of the Ever Sigma, the ILWU labor workforce, and the Everport terminal management team in Los Angeles. Los Angeles remains an important and strategic gateway for Evergreen, and we look forward to growing our business via the Port of Los Angeles.”

The 12-month period for this new record corresponds with the Port’s July 1, 2016 through June 30, 2017 Fiscal Year, and the Port is on track to end the 2017 calendar year exceeding last year’s record volumes. In 2006, Los Angeles was the first port to surpass an annual throughput of 8 million TEUs, a decade-long record that was broken with CY 2016 volumes of 8.8 million.

The Port of Los Angeles is America’s premier port and has a strong commitment to developing innovatively strategic and sustainable operations that benefit Southern California’s economy and quality of life. North America’s leading seaport by container volume and cargo value, the Port of Los Angeles facilitated $272 billion in trade during 2016. San Pedro Bay port complex operations and commerce facilitate one in nine jobs in the five-county Southern California region.