The list of all ships dismantled around the world in 2016, which the NGO Shipbreaking Platform has compiled and analysed, shows no improvements of the shipping industry’s management of its end-of-life vessels. Far from it: the Platform today releases data that indicate an increase in the number of ships sold for polluting and unsafe shipbreaking on the beaches of South Asia. In 2016, a total of 668 vessels were broken on tidal beaches, that is as much as 87% of all tonnage dismantled globally.

“The shipping industry is nowhere close to ensuring sustainable ship recycling practices. Last year, we saw not only an increase in the market share for dangerous and dirty shipbreaking, but also a record-breaking number of EU-owned vessels on the South Asian beaches. 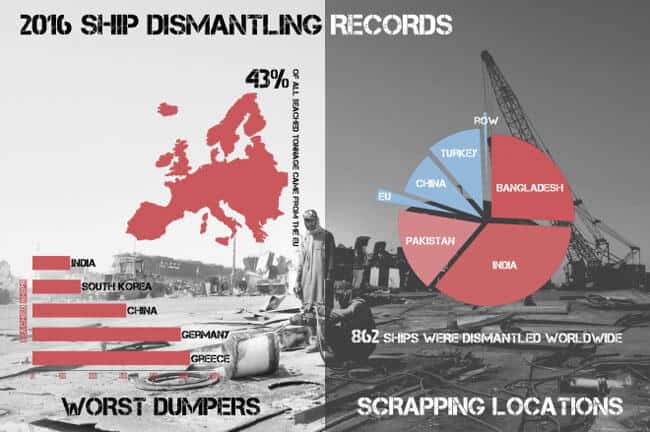 A jaw-dropping 84% of all European end-of-life ships ended up in either India, Pakistan or Bangladesh. Beaching yards are not only well known for their failure to respect international environmental protection standards, but also for their disrespect of fundamental labour rights and international waste trade law,” says Patrizia Heidegger, Executive Director of the Platform.

A higher number of ships beached means that workers, the environment and local communities in South Asia are exposed to ever increased hardship. 2016 saw the worst catastrophe in the history of the industry: on 1 November, at least 28 workers were killed instantly and more than 50 injured when an explosion and a massive fire shook a tanker beached in Gadani, Pakistan. The death toll in the Bangladeshi yards, which the Platform was able to document, reached 22 in 2016, with another 29 workers having suffered serious injuries. Whilst accident records in Indian shipbreaking yards are kept a secret, the Platform was informed of at least two fatal deaths in Alang.

It may seem a big surprise for a country whose industry is proud of green technology and engineering solutions, but GERMANY is responsible for the worst shipbreaking practices amongst all shipping nations when one compares the size of its fleet to the number of ships broken irresponsibly. German owners, banks and ship funds had a staggering 97 ships rammed up on the beaches of South Asia out of a total of 99 vessels sold for demolition: 98% of all obsolete German ships ended up on a beach! That not being enough, close to 40% were broken in Bangladesh, where conditions are known to be the worst. Amongst the most irresponsible owners are Hansa Mare with 12 ships, Alpha Ship, F. Laeisz and Peter Doehle with 7 each, and Dr. Peters, König & Cie, Norddeutsche Vermögen and Rickmers with 6 each.

The German shipbreaking practices come with a high death toll. During the breaking period of the RENATE N. at Seiko shipbreaking in Chittagong, Bangladesh, three workers were killed and three more injured (see “Accidents” in the Platform’s South Asia Quarterly Update).

The vessel owned by Neu Seeschifffahrt had been traded through cash buyer Wirana. Even the UN Special Rapporteur on Toxics and Human Rights expressed serious concerns in a submission to the German Government, criticizing the substandard practices of German owners. In November, another Bangladeshi worker was killed during the demolition of the only 10 year-old, loss-making container ship VIKOTRIA WULFF.

“It is not the first time that shipbreaking workers pay with their lives for the failed business practices of German ship owners and their ship funds. Due to numerous bankruptcies resulting from short-sighted and high-risk investment, insolvency administrators appointed by the courts quickly trade the unprofitable ships to the beaches of South Asia, and the bill for the shipping industry’s greed is paid by people and the environment”, comments Patrizia Heidegger.

GREECE was responsible for the highest absolute number of ships sold to South Asian shipbreaking yards in 2016: 104 ships in total. Since the Platform has started to compile data in 2009, Greek shipping companies have unceasingly topped the list of owners that opt for dirty and dangerous shipbreaking.

Backed by the Greek government, they continue to refuse liability for the damage done to workers and the environment. A Greek ship beached in Pakistan in December 2016 caused the death of five workers in January when a fire broke out on the GAZ FOUNTAIN owned by Athens-based Naftomar.

The worst corporate dumper prize goes to the UK-based ZODIAC. The company is operated out of London and owned by Eyal Ofer, son of late shipping magnate Sammy Ofer. Zodiac alone has sold 12 ships for breaking on the beaches in 2016, mostly to Bangladesh, and the company has been linked to severe accidents. During the demolition of Ofer’s ship SNOWDON, beached in Pakistan in October, a worker was killed in January this year.

Eyal’s brother Idan, owner of the QUANTUM PACIFIC GROUP and holder of a controlling stake in the ISRAEL CORPORATION, received the worst dumper award in 2015 for selling most of his end-of-life vessels to Bangladesh breakers – a more than dubious practice for a family that wants to be known for its philanthropy.

“It is scandalous that the burden to deal with Europe’s profit-greedy shipbuilding boom is shifted to communities and workers in South Asia: first the shipping industry creates a large overcapacity on the market, and then it fails to find responsible solutions for its obsolete ships,” says Heidegger. In 2016, also Maersk decided to take a U-turn on its previously progressive ship recycling policy: the Danish container ship giant decided to go back to the shipbreaking beaches of India where it is offered higher prices for its unwanted ships.

Being one of the catalysts of the overcapacity on the shipping market itself, Maersk has to get rid of 75 – 100 ships in the coming years. “This move to boost profits does not only help to rubberstamp the beaching method, but, very regrettably, it is also stalling real progress and innovation in India to move ship recycling to the next level – off the beach – to modern ship recycling facilities,” says Heidegger.

The data compiled by the Platform also show that ship owners continue to shield themselves from responsibility through the use of cash buyers such as GMS and Wirana. These scrap dealers reflag end-of-life vessels to last-voyage flags of convenience, such as Palau, Comoros and St Kitts and Nevis, and sell them off for the highest price offered by the worst yards.

“Looking at the flags used at end-of-life, it is clear that legislation based on flag state jurisdiction will not be able to bring substantial change to the current practices: who believes that a non-compliant flag and a cash buyer benefitting from the worst conditions will enforce improvements in shipbreaking yards?,” says Ingvild Jenssen, Policy Director and founder of the Platform. “The global shipbreaking crisis can only be solved through measures that go beyond flag state jurisdiction. That is why we call on the EU to demand a ship recycling licence from all vessels visiting EU ports.”

In 2017, the EU will publish a list of ship recycling facilities around the world that comply with high standards for environmental protection and workers’ safety. The list will be the first of its kind and an important reference point for sustainable ship recycling. German container line Hapag-Lloyd has already committed its end-of-life ships off the beach, and has announced that it will only use EU listed facilities. A financial incentive affecting ships trading with the EU is however needed to ensure that irresponsible ship owners are directed towards the facilities listed as approved by the EU.

A proposed Ship Recycling Licence scheme is now being discussed. The many scandals involving European shipping companies are also a driver behind the strong interest that various financial institutions have started to show in ship recycling: to ensure responsible business practices some are now setting criteria for shipping companies they finance while looking at the EU Ship Recycling Regulation for guidance.

For detailed figures and analysis on ships dismantled in 2016, click here.