With the on-going European migrant crisis, including the continued tragic loss of life in the southern Mediterranean offshore Libya, Human Rights at Sea and its supporting advisory work has been recognised and upheld by 26 MEPs of the European Parliament in response to a proposed separate State-led and imposed Code of Conduct which fails to engage with NGOs despite a European Commission direction to Italy to do so. The planned imposition by Italy has been reported to have been condemned by the UN.

In co-ordination with other civil society search and rescue (SAR) NGOs and the International Maritime Rescue Federation, the publishing of the first Voluntary Code of Conduct on 1st March 2017 has become a foundation planning and co-ordination document for many NGO organisations. 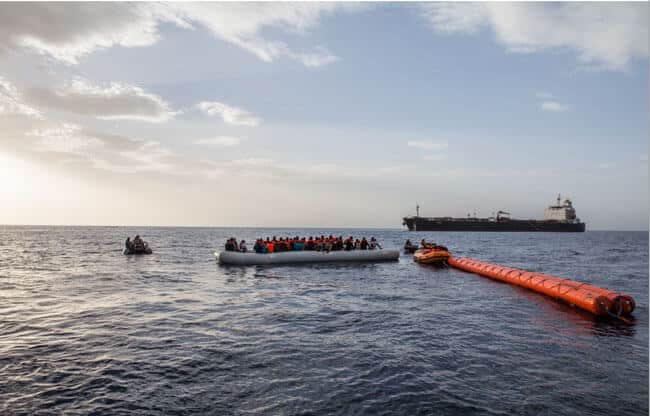 In an open letter from the Parliamentarians to President Juncker, Vice-President Timmermans, Commissioner Avramopoulos, President Tusk and all Justice and Home Affairs Ministers, the MEP’s called for attention to be paid to the existing SAR NGO Code of Conduct published through Human Rights at Sea, focusing on a comprehensive and humanitarian principled approach to rescue of distressed persons at sea.

This voluntary Code is to be shortly updated with a revised Second Edition.

The MEP letter was in response to the Joint declaration by Commissioner Avramopoulos and the Ministers of Interior of France, Germany and Italy issued on 3rd of July and the Communication on an “Action plan on measures to support Italy, reduce pressure along the Central Mediterranean route and increase solidarity” issued on 4th of July 2017.
Within the letter it stated:

Quote. “Secondly, we would like to raise our concerns on the extremely worrying immediate measures to be taken by the Commission, the EU Agencies the EU Member States, and particularly Italy, according to the Action plan as drafted by the Commission. We strongly believe that these proposed measures will inevitably lead to a violation of human rights, notably:

Human Rights at Sea CEO, David Hammond, commented: “The existing voluntary SAR NGO Code of Conduct has been carefully drafted with direct reference to established humanitarian principles and international maritime law. It is supported and is being used by the majority of NGOs operating in the southern Mediterranean as a core planning document. The intention to now impose a new Member State code of conduct without any NGO engagement, despite prolific rescue support to under-resourced State actors, should be robustly challenged for its validity. We should also be on notice that such an imposed code may lead to restrictive legislation preventing humanitarian actions at sea leading to increased loss of life.”