Despite the persistently challenging market environment, the EUROGATE Group was able to keep container handling volumes almost stable in the past financial year. In 2018, the Group handled a total of 14.1 million TEUs (standard containers) at its 12 locations in and around Europe. The volume of intermodal container transports increased by 2.8 per cent to around 1.05 million TEUs. 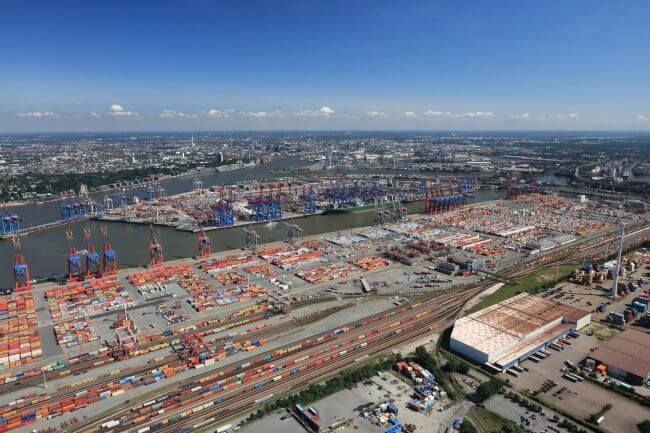 At a good 5.48 million TEUs, the Bremerhaven container terminals recorded a throughput almost on a par with 2017 (-1.3 per cent, 2017: 5.54 million TEUs). The schedule changes made by the shipping line alliances in April/May 2018 had no significant impact on this location.

At EUROGATE Container Terminal Hamburg by contrast, handling volumes decreased slightly by 3 per cent overall to just below 1.65 million TEUs; however, the integration of Hamburg Süd into the Maersk Group and the successful acquisition of new customer Hyundai Merchant Marine halted the negative trend of the past few years brought about by the restructuring of the alliances. Thus, following a weak first six months with a decline of around 16 per cent, capacity utilisation at the terminal recovered significantly in the second half-year.

With an increase of 18.3 per cent in 2018, EUROGATE Container Terminal Wilhelmshaven recorded double-digit growth for the third consecutive year. In 2018, in excess of 650,000 TEUs were handled here for the first time.

Significant declines at the transhipment terminals in Italy impacted negatively on handling volumes. Cagliari in particular has been very hard hit by the transfer of scheduled services to other terminals and is losing almost 50 per cent of its handling volumes. Gioia Tauro recorded a decline of 4.5 per cent but remains at a high level (2.29 million TEUs). Against this trend, the terminals in La Spezia (1.35 million TEUs, +0.8 per cent) and Salerno (332,000 TEUs, +5.6 per cent) developed positively.

The other terminals in the EUROGATE Group also reported stable handling volumes year-on-year overall. In Tangier, Morocco, the handling volume remained at the same high level as the previous year with 1.38 million TEUs. The strike-related decline in volumes in Lisbon, Portugal, of around 30 per cent to 137,000 TEUs was offset by the positive development of the location in Limassol, Cyprus, with around 14 per cent growth to almost 394,000 TEUs. The transhipment volume in Ust-Luga, Russia, was 69,000 TEUs (-7.1 per cent, 2017: 74,000 TEUs) due to sanctions.

Michael Blach, Chairman of the EUROGATE Group Management Board, comments: “We can be satisfied with the handling figures for 2018. Above all, the fact that we were able to maintain a very stable level in Germany is gratifying and shows that we can hold our own against the western ports and the new competitors on the Baltic Sea coast. Although 2018 was without a doubt a successful year, the trend in handling volumes shows us that the spread of opportunities and risks, as well as their impact on our business, has increased against the background of the changed parameters. With this in mind, our priority is to leverage the opportunities in order to expand our market position.”

Crew Stranded In Manila Bay For 5 Months Now Without Pay, Running Out Of Food And Water
Royal Caribbean Announces New Quantum Of The Seas Sailings From Singapore