You are here: Home › Shipping News › Environmentalists Sue Over Shell Plan To Drill In Arctic
TwitterFacebookLinkedInPinterestBuffer

Several environmental groups sued the United States on Tuesday to derail Royal Dutch Shell PLC’s plan to drill in the Arctic Ocean as soon as July.

The Bureau of Ocean Energy Management, an agency within the U.S. Department of the Interior, gave conditional approval in May to Shell’s resumption of fossil fuel exploration in the Arctic, which was paused after a mishap-filled 2012 season.

The decision was met with approval by some Alaska lawmakers, who believe it will bring money and jobs to the state, as well as protests from environmentalists.

The Sierra Club and nine other groups sought to overturn the government’s decision in a petition with the San Francisco-based 9th U.S. Circuit Court of Appeals on Tuesday.

According to the petition, the plaintiffs are conservation and Alaska Native groups, the members of which “use and enjoy the affected area for recreational, aesthetic, or scientific purposes or whose members depend on the ecosystems and wildlife of the Arctic for subsistence, cultural, and traditional uses.” 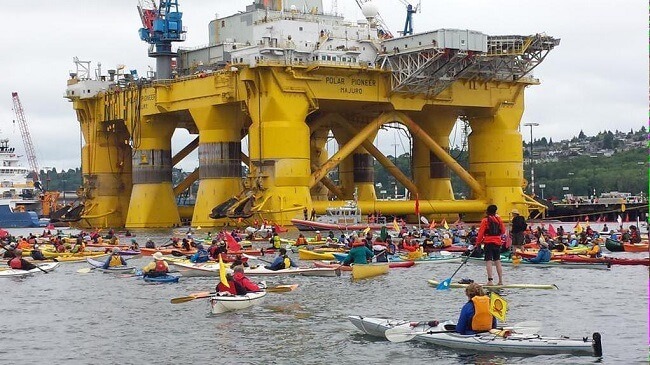 Shell spokesman Curtis Smith said the company expected its plan would be challenged in court “by many of the same organizations that have historically used legal maneuvers to delay Arctic exploration.”

The Arctic is estimated to contain about 20 percent of the world’s undiscovered oil and natural gas, but its recovery could be decades away.

Environmental groups contend that weather conditions make it impossible to safely drill in the Arctic, a region that helps regulate the global climate because of its vast layers of sea ice.

In approving Shell’s plan, U.S. agencies said the company would still have to obtain additional permits and biological opinions to protect resources, wildlife and workers.

Over the last month, activists staged protests over Shell’s use of Seattle’s port as a home base for at least one Arctic-bound drilling rig.

Amid the protests, the Port of Seattle commission appealed the city’s interpretation of permit requirements that pushed shipping company Foss Maritime and Shell into violation of city code.

The city said in a memo it would not impose daily fines that start at $150 while it considers the appeal, a process that is expected to continue after the rigs leave for the Arctic.

On Tuesday, a coalition of Alaska business owners and lawmakers urged the port in a letter to continue honoring the lease agreement, saying energy represents one-third of Alaskan jobs.