From the very beginning, the M/S Viking Grace – delivered in January 2013 – was an environmental milestone. The vessel attracted global attention as an environmental pioneer by being the first large passenger vessel to run on liquefied natural gas (LNG). Now, three and a half years later, one thousand bunkerings (fuellings) have been performed in partnership with the Swedish company AGA Gas AB.

The M/S Seagas, which was specially built for ship-to-ship refuelling, has performed its 1,000th LNG bunkering of the Viking Grace since that vessel was placed in service in January 2013. The Seagas supplies the Viking Grace with about 60 tonnes of LNG while the vessel is docked in the morning at Stadsgården in central Stockholm. The Seagas is the first vessel of its kind in the world and is classified according to the same regulations as for ocean-going
LNG tankers. 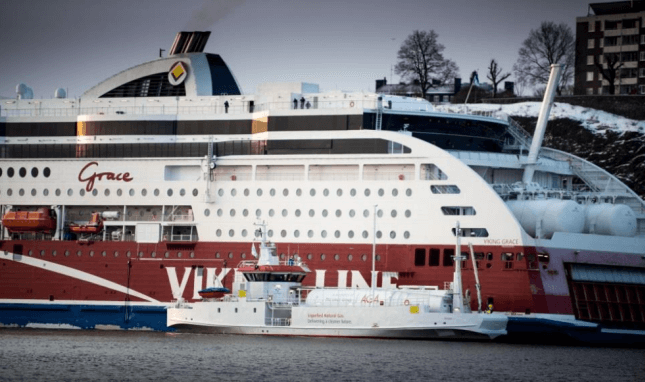 Viking Line’s wish was for bunkering to occur as quickly as possible, with no interruptions, with assured deliveries and without affecting cargo handling on the quay. With its safe LNG bunker solution using the Seagas, AGA could meet Viking Line’s needs. The safety aspect was also extremely important in this context.

“We are really pleased about having used LNG to fuel the M/S Viking Grace”, says Jan Hanses, President and CEO of Viking Line Abp. “Both the technical solution developed by AGA and the vessel’s operation have outperformed expectations, and it is gratifying to note the major benefits for the workplace along with the environmental gains that running on LNG provides.”

“We are obviously delighted with the positive response we have had from Viking Line regarding the Seagas and our bunkering solution”, says Jonas Åkermark, who is in charge of the LNG marine market at AGA Gas AB. “There is still heavy interest in the Seagas, our shipto-ship bunkering solution and LNG as a marine fuel both in Sweden and internationally. We have a well-functioning infrastructure solution in place in Stockholm and the possibility of
bunkering more vessels.”

In February 2012, Viking Line signed an agreement with AGA Gas AB for the delivery of liquefied natural gas (LNG) for its newly ordered passenger vessel the Viking Grace. With its strong environmental profile, the ship was a trailblazer in the marine industry, going into service less than a year later, in January 2013. There were many unanswered questions, including how the gas would actually be supplied to the vessel and the attitude of customers
towards what, for them, was a new type of fuel. Among the steps it took to ensure it was well prepared, Viking Line put together factsheets about the properties of the gas. The company expected some degree of scepticism, but in retrospect the response was incredibly positive. Viking Line received a very favourable response to the fuel alternative it had chosen and for the environmental values that the Viking Grace represented. International
attention also exceeded all expectations.