Hundreds of tourists and a handful of emotional Cuban-Americans arrived on the first U.S. cruise ship to sail to Havana in decades on Monday, spilling onto the cobbled streets of the old city where they were warmly greeted by residents.

It was another first for the two countries since U.S. President Barack Obama and Cuban President Raul Castro announced a historic rapprochement in December 2014, and comes weeks after Obama’s visit to the Caribbean island.

Carnival Corp’s (CCL.N) Adonia, a small ship carrying 700 passengers, slipped through the channel into Havana Bay in the morning under picture-perfect skies, then docked alongside the colonial quarter recently visited by Obama. 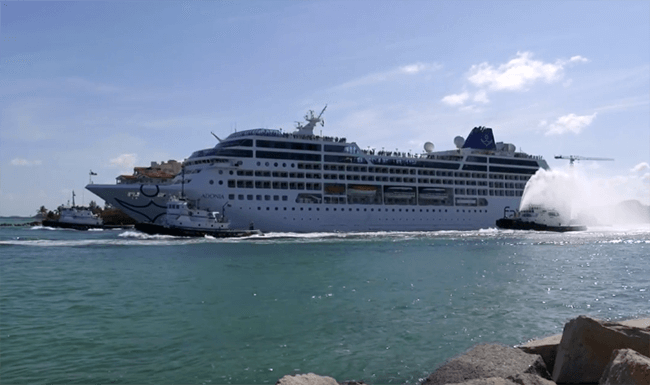 The visitors fanned out on the city’s restored streets for walking tours after an arrival ceremony featuring salsa and Afro-Cuban music, and lots of rum cocktails.

According to tour guides, some of the passengers were due to sample Havana’s night life later at the world famous Tropicana cabaret.

But for Cuban-born Anna Garcia, the moment was more than just a holiday.

“I’m nervous and excited at the same time, I left Cuba 48 years ago, when I was six years old. So just imagine everything that I’m feeling right now,” said Garcia as she stepped off the boat and entered Cuban territory for the first time since childhood.

A Cuban rule prohibiting people born in Cuba from entering or leaving the Communist-ruled country by sea led to protests from exiles and almost delayed the cruise, before Cuba agreed to lift the ban.

That unusual flexibility under pressure was itself a signal of change in Cuba, long scarred by memories of the sea-borne, U.S.-supported Bay of Pigs invasion and other acts of aggression from across the Florida Straits.

Many Cubans have crossed the treacherous body of water on rafts and makeshift boats to reach the United States as exiles and migrants.

The Adonia was the first U.S.-owned ship to sail to Cuba from the United States since Fidel Castro’s 1959 revolution, Carnival said. There were some cruises from the United States to Cuba under President Jimmy Carter in the late 1970s, however. They included a voyage by the Greek-owned M.S. Daphne that took a group of jazz musicians, led by Dizzy Gillespie and Stan Getz, from New Orleans to Havana in 1977.

Arnaldo Perez, a Cuban-American who works as Carnival’s general counsel, was the first to step off the ship, to handshakes and hugs from Cuban officials.

“You know this is very special for me because it is the first time that a Cuban-American is allowed to return by sea,” he said.

Locals, some draped in the Stars and Stripes and the Cuban flag cheered as the ship glided in.

Obama has made the dramatic shift in U.S. policy toward Cuba a part of his legacy.

The two countries reestablished diplomatic relations a year ago and have signed agreements on issues of common concern such as the environment, postal services and direct flights.

Talks are ongoing over other issues that have kept the next-door neighbors apart, from the return of fugitives to reparations for embargo damages and the return of the Guantanamo Naval Base.

Obama had urged the Republican-controlled Congress to lift the embargo and travel ban, but to no avail, resorting to his executive powers to punch holes in them instead.

“Regularly scheduled cruises are the third leg of the land, sea and air efforts by the Obama administration to cement its policy changes, the goal is to make the initiatives big and loud so that they are harder to dislodge,” said John Kavulich, president of the New York-based US-Cuba Trade and Economic Council.

Cruises to Cuba could generate $300 million in revenues to the companies and $88 million to Cuba in the 2016/17 season if all the companies that wish to sail are given the required approvals, Kavulich said.