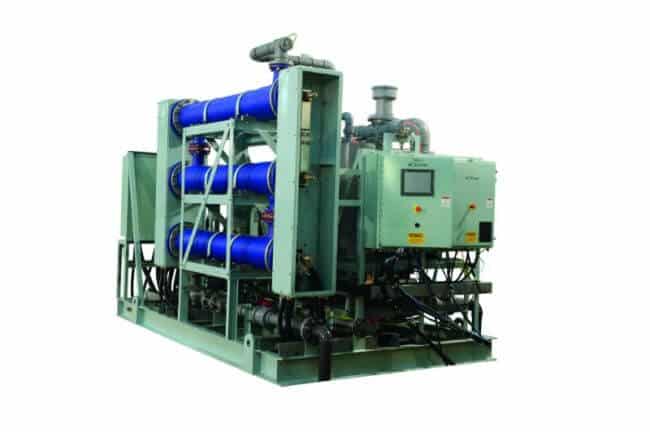 Dr Stelios Kyriacou, General Manager of BALPURE® BWMS, De Nora commented: “Hazardous area tanker installations, which can be challenging for some suppliers, is a core area of expertise for us. At a time when ship owners are seeking practical, unbiased information, we want to address three common misconceptions in relation to chlorine, hydrogen, and system configuration.”

Kyriacou continued: “To sum it up, when it comes to chlorine, electrochlorination systems produce a biocide in a concentration just a little more than is used to clean a baby’s bottle! Regarding hydrogen, our BALPURE® ballast water treatment systems, have a proprietary and patented  inline gas separator, ensuring hydrogen is dealt with in the liquid stream and never reaches the ballast tank. And when it comes to system configuration, slip stream electrochlorination is superior to UV and full flow electrolysis BWTS since all such systems install major treatment components within the hazardous zone.  Such components include UV reactors and electrochemical cells, both connected by high power electrical cables to their respective power supplies. The bottom line is that, when it comes to safety, certain electrochlorination BWTS are far better suited to vessels with large flows and hazardous zones.”

Although the term electrochlorination may suggest the presence of chlorine, in reality the process involves the generation of sodium hypochlorite, which is a diluted bleach, not chlorine gas. To provide context as to its safety credentials, household bleach is a hypochlorite solution varying from 5.25 up to 8.25% concentration, while sterilising solutions used for babies’ bottles are available in  1 and 2% strengths. Seawater electrochlorination systems produce a maximum of 1.5%.

In addition, by automatically regulating the power, only the required amount of sodium hypochlorite is produced, ensuring that BALPURE® ballast water treatment systems, through intelligent control positively impact OPEX costs. When it comes to hydrogen, the BALPURE® technology proprietary control system incorporates intelligent controls with a safety bias. This includes an inline gas separator which ensures the safe removal of hydrogen from the liquid stream before the treated water reaches any ballast tank thus eliminating any risk of trapped hydrogen gas in the head space of ballast tanks. The design criteria used for the BALPURE process ensures full hydrogen degassing as it is produced, in contrast to other systems in which hydrogen is allowed to enter the ballast tanks.

Although certain UV treatment systems can now be more compact, safety limitations in relation to configuration still impact the suitability of these systems for large flows in hazardous zone installations. UV systems must be located on the main ballast line of a vessel, which is often a system-heavy portion of the ship and frequently installed in pump rooms classified as hazardous zones. For vessels like COT, product and chemical tankers, it is critical to ensure that the system is safe for installation in any hazardous areas. Due to its configuration, any maintenance or failures in UV systems can create significant challenges as crew members are required to enter into the hazardous zone, presenting a safety risk as well as potential delays. For example, if any fault is identified or a lamp fails and needs to be replaced, space must be purged for several hours before anyone can enter to perform the necessary remediation as guided by IMO Resolution A.1050(27).

“At De Nora, we understand electrochlorination and have over 90 years of IP and knowledge concentrated on water purification and disinfection as well as on  special electrodes tailored for hypochlorite generation from seawater,” concluded Kyriacou. “We have invested many years into marinising these core technologies, which is why we know that our electrochlorination system remains the primary BWTS of choice for vessels with large flows and hazardous areas. A further confirmation of the robustness of BALPURE® system comes from the US EPA Science Advisory Board (SAB) that identified BALPURE® solution as one of three systems that demonstrated the ability to meet a standard 10 times more stringent than the IMO D-2 standard. ”