Electrical installation company Bakker Sliedrecht has played an important part in the conversion of Boskalis’ heavy transport vessel (HTV) Finesse into transport and installation crane vessel (HLV) Bokalift 1. After the official launch, Boskalis will deploy the vessel for building offshore wind farms, the installation and decommissioning of oil and gas platforms and salvage projects. 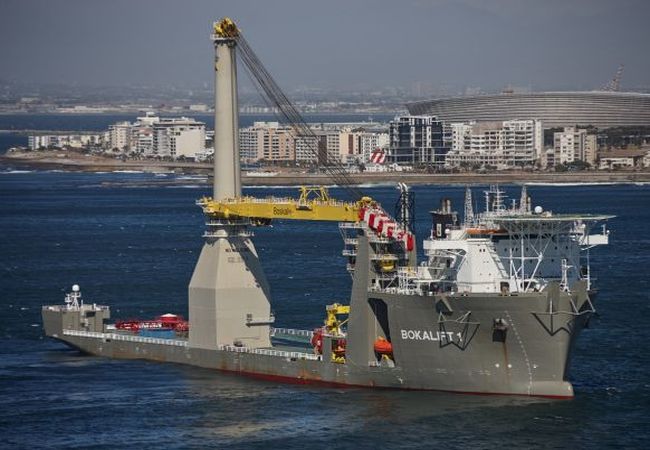 Due to its huge empty deck space of 165 by 43 meters and its mid-ship, 3000 tons revolving Huisman Crane, the Bokalift 1 can double the usual load of existing crane and transport vessels. Thanks to the innovative dynamic positioning 2-system (DP2) the vessel will remain stable at its position at all times.

During the conversion Bakker Sliedrecht was responsible for the supervision and coordination between the client and all participating electro technical parties. Both during the conversion at the Keppel shipyard in Singapore, the installation of the crane by Huisman in China and during the intensive FMEA tests in Cape Town.

During the conversion, the large ballasting tanks, which made the heavy transport vessel semi-submersible, were converted to give way to the requirements of diesel generators and switchboards. These are necessary for the new thrusters, which keep the ship in position. Because of DP2, Bakker Sliedrecht had to double install all electrical installations and drive systems – existing and new – in order to guarantee safe operations of the systems at all time. For example, in case of a thruster or generator failure or other calamities. This is of the utmost importance in offshore projects.

Bakker Sliedrecht coordinated all installations and the commissioning. All electrical installations, switchboards, engines and generators were produced in Sliedrecht or elsewhere in Europe and then transported to the yard in Singapore. In the second phase the company assisted in the installation of the crane. In the third phase, the crane vessel was subjected to a large number of tests in the Failure Mode and Effects Analysis (FMEA) at the coast of Cape Town.

“Bakker was ordered to complete the conversion in 12 months. We succeeded and that is a very swift lead time for such a project,” says project manager Johan van Hal. “For Boskalis, our know-how, practical attitude, reliability and flexibility were decisive for awarding us the contract.”