Egypt has finished building its New Suez Canal, its overseer said on Wednesday, a project President Abdel Fattah al-Sisi sees as a symbol of national pride and a major chance to stimulate an economy suffering double-digit unemployment.

The army led work 11 months ago on the $8-billion canal, flanking the existing, 145-year-old waterway and part of a larger undertaking to expand trade along the fastest shipping route between Europe and Asia.

The Suez Canal is a vital source of hard currency for Egypt, particularly since the 2011 uprising that scared off tourists and foreign investment.

“We have finished work on time and even before the specified time,” retired Admiral Mohab Mameesh, chairman of the Suez Canal Authority, said at a news conference.

Sisi had ordered that the canal be completed within a year.

The new waterway will be officially unveiled at a lavish event to be attended by Sisi and foreign dignitaries on Aug. 6. The first cargo ships passed through in a test-run last week. 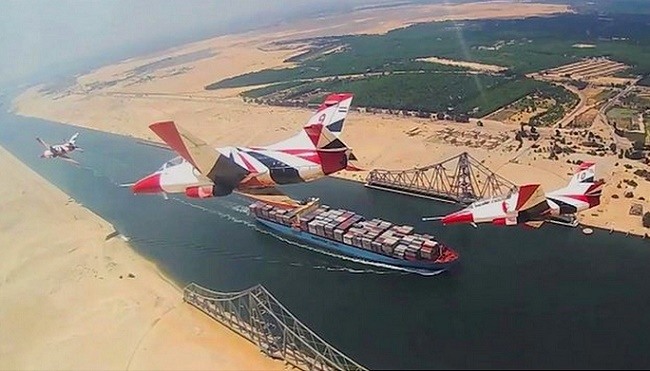 Mameesh stressed the canal’s security, saying recent attacks would not have an effect on it.

Islamic State’s Egypt affiliate said earlier this month it had fired a rocket at an Egyptian naval vessel in the Mediterranean Sea.

Egypt is battling an Islamist insurgency in the Sinai that lies between Israel, the Gaza Strip and the Suez Canal.

Mameesh’s remarks came after a visit to the canal by a delegation from the International Chamber of Shipping (ICS), the trade association for merchant ship owners and operators.

“The important takeaway is one of wonder at the fact this (has been) completed so quickly,” said ICS secretary general Peter Hinchliffe.

“More ships will be able to use the canal and most importantly for us the time that ships are taking to get through the canal is being reduced,” he said.

The existing canal earns Egypt around $5 billion per year. The new canal, which will allow two-way traffic of larger ships, is supposed to increase revenues by 2023 to $15 billion. It will reduce navigation time for ships to 11 hours from about 22.

The government also plans to build an international industrial and logistics hub near the Suez Canal that it expects will eventually make up about a third of the Egyptian economy.

Mameesh said work on a new side channel connecting East Port Said to the Mediterranean would begin on Aug. 7.

Watch: Timelapse Of Sailing Down The Expanded Suez Canal