The construction of Maasvlakte 2 has been recognised by the award of the prof. dr. ir. J.F. Agema prize, which is awarded every five years to an innovative marine engineering work that was designed or constructed by a Dutch party.

This prize, the initiative of the KIVI (Royal Institute of Engineers), goes to the entire team of client, designer and contractor. In the case of the Maasvlakte 2 project, the winning team includes the Port of Rotterdam Authority and contractors Boskalis and Van Oord, as part of the PUMA consortium.

The winner was announced on 10 November during the Waterbouwdag (Water Management Day) 2015 in Rotterdam, the Netherlands. Maasvlakte 2 was nominated for the award together with four other marine projects. ‘Cooperation between the client and the consortium resulted in many innovative solutions for design, execution methods and survey techniques, such as the hard seawall, a combination of a block dam of recycled concrete blocks and a cobblestone beach. 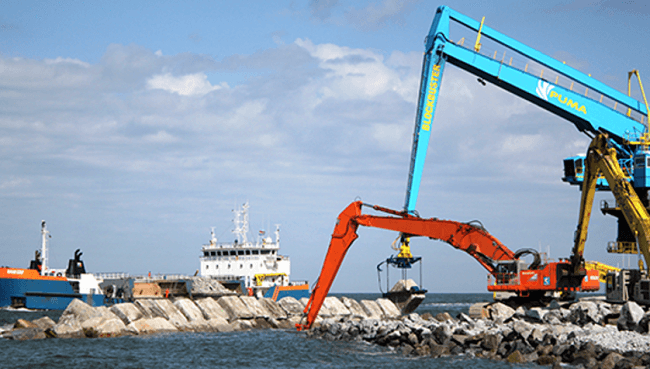 The Maasvlakte 2 project also focused on sustainability in design, layout and execution. For example, a borrow area near the coast was selected from those available to save energy and reduce emissions,’ says Dirk Hamer, former Project Director of PUMA.

‘The Port of Rotterdam Authority considers this prestigious prize to be the crowning achievement of this joint project. It demonstrates that constructive cooperation can lead to exceptional results. And innovative solutions were not the only achievement. The work was completed on time, within budget and according to the agreed quality standards, with PUMA as well as with other stakeholders,’ explains Ronald Paul, former director of the Project organization Maasvlakte 2.

PUMA completed by commission of Port of Rotterdam Authority as one of the main contractors the first part of Maasvlakte 2 – the expansion of the port of Rotterdam – between 2008 and 2013. This phase encompassed the creation of a new port area covering 700 hectares, including the construction of an 11-kilometre seawall. The port extension has increased the port’s competitiveness as a world-class logistical node and industrial complex.