Baggerbedrijf De Boer B.V. (Dutch Dredging B.V.) has ordered two custom, special-purpose tugs to be built at Damen Shipyards Hardinxveld in the Netherlands through the subsidiairy De Boer Remorquage SARL. The tugs are for a 10-year contract with Grand Port Maritime de Guyane in the ports of Cayenne and Kourou in French Guyana.

Their primary functions will be assisting vessels entering and leaving port, and rendering help in the event of emergencies including fire-fighting. An important secondary role for both vessels will be assisting with maintenance dredging operations in both ports. 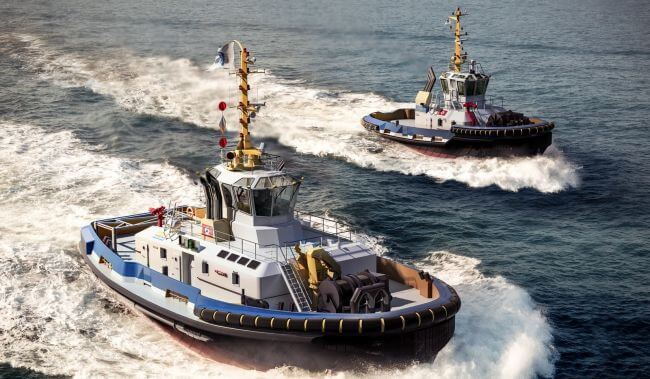 The larger of the two, the WID 2915, will be configured for a variety of roles including dredging using the Air and Water Injection Dredging (AIRSET) method. The smaller ASD 2310 SD (Shallow Draught) tug will be fitted out to operate the equipment needed for bed-levelling, and will also carry out surveying activities. As these two tugs will be the only support vessels available to either port they can also be used for the transportation of equipment and cargo, up to container-sized loads.

“We chose Damen for its reputation for designing and building both tugs and dredgers to a high standard,” said Dutch Dredging CEO Hugo van de Graaf. “This made it the ideal partner for the construction of custom, multi-purpose tug/dredgers. In addition to this, the vessels will be built under French rules and classification, something in which Damen is also experienced.” French Guyana is a Department of France, and is perhaps best known for being the location of the Guyana Space Centre, which is used by the European Space Agency. 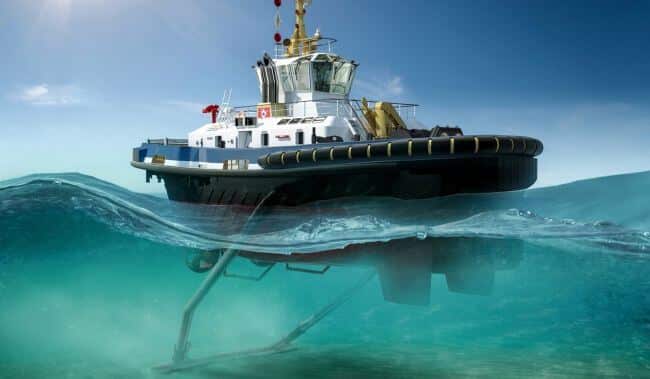 Joining Dutch Dredging in the project is the IJmuiden-based Iskes Towage & Salvage, which will be Dutch Dredging’s co-owner in the French subsidiary company De Boer Remorquage SARL, which is the legal entity that ordered the vessels. It will also operate the tugs and will aim to employ and train a number of local staff and crew in the skills required to man and maintain workboats. Iskes already operates a number of Damen vessels, including three ASD 2810 tugs, and is due to take delivery of a Damen ASD 3212 in the next few weeks. Its operating experience in harbour towing and assistance has already provided valuable input for the design and build process.

“The success of this deal was based on trust and a respect for each other’s knowledge that the counterparties quickly developed,” said Jos van Woerkum, managing director of Damen Shipyards Hardinxveld. “While we know Iskes Towage and Salvage well, this is our first time working with Baggerbedrijf De Boer. Yet in just a few months we developed together the WID 2915 by taking an existing Damen design and adding the collective experience of the two project partners to create the optimum solution.”

The vessels have been designed to meet the needs of the end client; Grand Port Maritime de Guyane, which also contributed to the development of the designs via its own consultant, Hydro GC. The consultant checked and approved the design, and helped optimise the dredging-towing balance so as to achieve an equilibrium within the given specifications. Dutch Dredging contributed its knowledge of the unique technique of water and air injection dredging, that it has built up over 20 years. Its experience over the past 12 years of operating in the specific conditions of French Guyana has also been very useful.

“This is the first time that we have done business with Damen, and I really enjoyed the process that achieved this final result,” added Hugo van de Graaf. “The dedication and professionalism of the teams from all the parties involved plus that of the various crews gives me confidence that together we have designed something really special!”