On Sunday a joint statement was issued by Hong Kong-based Orient Overseas International Ltd. (OOIL) and Chinese state-owned Cosco Shipping Holdings Ltd. (Cosco) and Shanghai International Port Group Co. (SIPG) for the latter pair to acquire all of OOIL shares at an offer price of HKD 78.67 (USD 10.07) per share.

The price represents a 31% premium on Friday’s closing price of HKD 60 and values OOIL at around HKD 49.2billion (USD 6.3bn). On the completion of the deal, Cosco will hold 90.1% while SIPG will hold the remaining 9.9% stake in OOIL. The joint buyers said they will keep the OOIL branding, retain its listed status and maintain the companies’ global headquarters in Hong Kong along with all management. Employees will retain the existing compensation and benefits, nor will any lose jobs as a result of the transaction for at least 24 months after the offer close. 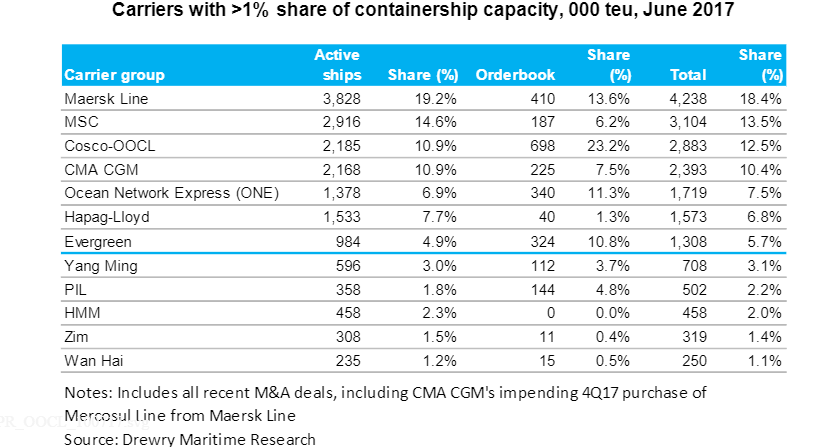 Drewry’s view on the proposed takeover

What are Cosco and SIPG buying?

OOIL and its container unit OOCL have a good track record for above-average profits in a challenging market and a reputation for being a very well-run company, earning the moniker “The Perfect Bride” by Drewry Maritime Financial Research. Retaining the management team, processes and systems is a wise move and could be of enormous value to Cosco, in our opinion.

From a hardware perspective, OOCL has an owned-fleet of 66 containerships aggregating approximately 440,000 teu. It is a young and modern fleet with an average age of 7.1 years and average nominal capacity of 6,600 teu. It is introducing its first 21,000 teu vessel with five more to deliver and options for another six which it could easily exercise.

Based on existing fleet and orderbooks the combined Cosco-OOCL entity would become the world’s third largest container carrier, overtaking its partner in the Ocean Alliance, CMA CGM (see table).

Cosco itself has a large orderbook, including newbuilds inherited from last year’s merger with China Shipping Container Lines. As such, it will have little requirement to order any more new ships in an already over-supplied market.

OOIL/OOCL has interests in four terminals: 100% owned facilities in Long Beach in the US and Kaohsiung, Taiwan, and minority stakes (20%) in two Chinese terminals (Tianjin and Ningbo).

Operationally, fitting OOCL into the bigger company should not be too difficult as both OOCL and Cosco already belong to the Ocean Alliance (alongside CMA CGM and Evergreen) that operates mainly in the East-West container trades. OOCL is not a major player in the North-South tradelanes that fall outside of the scope of the carrier group.

The biggest impact will be felt in Intra-Asia, where both carriers already have a large presence, while the footprint in the Asia to Middle East trade will also rise significantly.

From a marketing perspective the acquisition of OOCL will enable Cosco to broaden its customer base, having previously being perceived, rightly or wrongly, as China-centric. OOCL’s reputation and history with global shippers will provide Cosco with an inroad to a wider selection of big Western shippers with volume.

As far as terminal ownership is concerned, in Ningbo, Cosco is also a shareholder in the same terminal as OOCL so this is a simple consolidation. In Tianjin, Cosco already has stakes in two terminals, neither of which are the same as the terminal in which OOCL has a stake, and so some ownership consolidation may take place here. This may involve Cosco taking an interest at the port authority level of ownership, as it has done in, for example, Qingdao.

OOCL’s Long Beach operation is undergoing a very large re-development that will see the existing one-berth Long Beach Container Terminal at Pier F closed and the three-berth Middle Harbor Redevelopment Project (MHRP) replace it. Phase I of MHRP went live in April 2016 and has since been in full operation; Phase II is expected to be operational at the end of 2017.

Cosco already has two terminals in LA/LB so this will be a third and by 2020 these three terminals will account for nearly 30% of the capacity of LA/LB. So while the capacity in LA/LB remains physically fragmented, the ownership is at least consolidating.

In Kaohsiung, Cosco has a stake in one terminal (along with China Merchants, Yang Ming, NYK and Ports America). The OOCL terminal is a different one.

Cosco Shipping Ports (CSP) is reportedly acquiring a 15% stake in SIPG from Shanghai Tongsheng Investment and this would make CSP the third largest shareholder in SIPG. This is further evidence of the agglomeration of the Chinese state-owned enterprises involved in the port sector. SIPG’s involvement in the OOCL deal is therefore not a left-field move but very much further evidence of the consolidation and intertwining of Chinese-owned port sector activity.

Is the deal good value?

Earlier reports suggested the valuation of the deal would be closer to USD 4 billion, which would be similar to what CMA CGM paid for NOL/APL. That always seemed undervalued considering OOIL’s better financial performance and reputation, plus the improving market outlook. However, at USD 6.3bn the price does seem a bit steep. According to Drewry Maritime Financial Research, OOIL’s book value stood at USD 4.5bn based on FY16 numbers, meaning OOIL was able to extract a sizeable premium.

The simple answer is that we don’t know, but recent container M&A such as Maersk Line’s recent takeover of Hamburg Süd and the proposed ONE merger of Japanese carriers have all encountered minor issues so the possibility of some conditions being applied by non-Chinese authorities cannot be entirely discounted.

Shippers are getting used to consolidation in the container industry. That doesn’t mean they have to like it. Even though OOIL/OOCL will remain as a separate brand it is questionable just how independent they will be from one another. Effectively, shippers will be losing yet another carrier from the pool that increasingly resembles more of a puddle.

After all of the latest M&A deals have been concluded and the existing newbuilding have been delivered by 2021 the top seven ocean carriers will control approximately three-quarters of the world’s containership fleet. Back in 2005 the same bracket of carriers held a share of around 37%.

Drewry research shows that the number of vessel operators on the two biggest deep-sea trades, Transpacific and Asia-North Europe has reduced significantly over the past two years. As of June 2017 there were only nine different carriers (eight if you discount OOCL) deploying ships in Asia-North Europe, compared to 16 in January 2015. In the Transpacific the number has reduced from 21 to 16 (15 without OOCL) over the same period.

The accelerating trend towards oligopolisation in container shipping will reduce shippers’ options and raise freight rates. It is the unfortunate price to be paid for years of non-compensatory freight rates that have driven carriers to seek safety in numbers, either through bigger alliances and/or M&A.

The sale of OOIL/OOCL means there aren’t many other takeover candidates left on the shelf. Such is the scale of the carriers within the top 7 that any merger within that group would find it difficult to pass regulatory approval. There could still be some minor regional acquisitions but the big wave of container M&A looks to have been concluded with this deal.

Impact on industry: one step nearer to Liner Paradise

Where there are losers, there are winners. Notwithstanding any potential roadblocks to future M&A, the consolidation that has already occurred, plus much brighter market prospects and the moratorium on new ships, offers carriers a golden opportunity for far greater profitability in the near future. With fewer carriers, that in time will become financially stronger; the pendulum is swinging back towards those that have grown to survive.