The cost of operating cargo ships is forecast to rise over the next two years after falling in 2015, according to the latest Ship Operating Costs Annual Review and Forecast 2015/16 report published by global shipping consultancy Drewry.

The average decline in ship operating costs across the sectors covered in the report in 2015 was 1.0%, but for ships that are big consumers of lube oils, the decline in overall costs was closer to 2%. Weak freight markets have forced ship owners to trim costs, while they have also been able to take advantage of falling commodity prices and lower insurance costs. 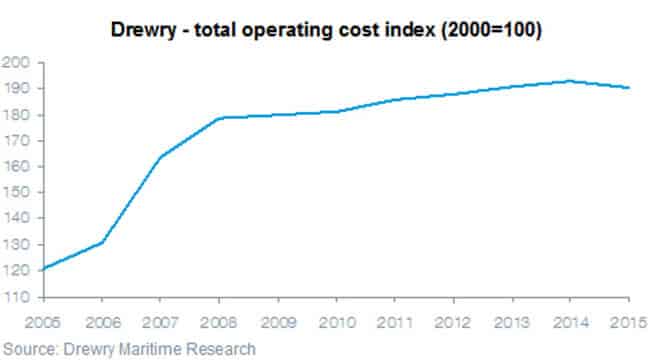 “Operating costs are likely to rise in the future, as the scope for further cost cutting is in most cases quite limited. However, the expected increases in 2016 and 2017 are likely to be modest in nature as we anticipate only small rises in the cost of lube oils and other commodities; with a relatively weak global economy inflation is also expected to remain low,” comments Nigel Gardiner, Managing Director at Drewry.

Modest increases in manning costs are in the pipeline given the uplifts that have been agreed in International Transport Workers’ Federation (ITF) wage scales for 2016 and 2017. If freight markets improve hull values for modern vessels will rise and this should lead to higher hull and machinery (H&M) premiums, but only small rises are expected in 2016 and 2017.

“Over the past few years of low economic growth, expenditure on repairs and maintenance has for many owners been cut back and when markets improve we expect some ‘catching up’ to take place. Hence, the expectation is that expenditure on R&M will rise faster than inflation”, concludes Gardiner