A wave of cargo cancellations from the US is putting additional pressure on VLGC rates, according to the latest edition of the LPG Forecaster, published by global shipping consultancy Drewry.

Two major factors have lowered VLGC rates in recent times: excessive fleet growth and weak arbitrate opportunities caused by low LPG prices. The VLGC fleet has expanded at the rate of 7%, quarter-on-quarter over the last four quarters, fast outpacing cargo demand growth. Meanwhile, the price differential between LPG in the US and Asia has averaged a mere $60 per tonne in the third quarter of 2016, down from $208 per tonne over the same period last year. The narrowing gap has squeezed the margin in arbitrage trading, thus affecting employment of VLGCs in this trade. 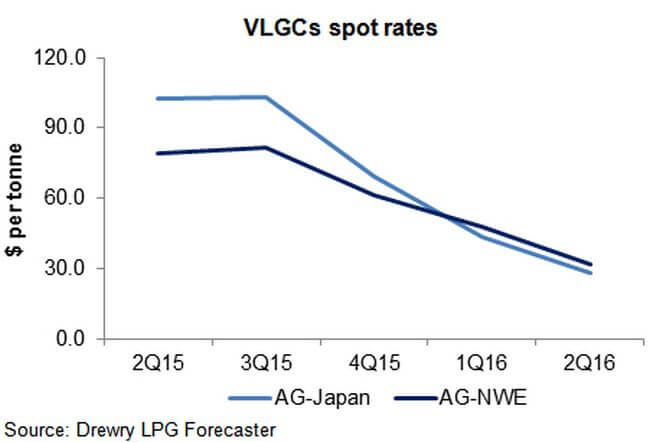 However, a third factor has emerged recently in the form of high numbers of cargo cancellations from the US export terminals. Three cargoes were cancelled in June, seven in July and 12 have been cancelled in August so far. While Asian demand has remained resilient, it has not been sufficiently strong to fully absorb the plentiful supply from both the US and Middle East. As a result of these cancellations, vessels that were supposed to carry US origin cargo are now seeking employment in the spot market, thereby putting further pressure on rates. The Baltic Index AG-Japan benchmark fell below the crucial level of $20 per tonne last week and shipowners earnings have now fallen below the operating cost.

“Although cancelations are expected to reduce from the fourth quarter as countries increase their stock-building programme to meet the winter heating demand, this will not be enough to enable shipping rates to recover as vessel supply will remain high. An additional 26 VLGCs will be joining the fleet by the end of 2016 which will keep rates under pressure,” said Shresth Sarma, senior analyst, gas shipping at Drewry.