You are here: Home › Shipping News › Drewry: No Reprieve For Multipurpose Shipping Until 2018
TwitterFacebookLinkedInPinterestBuffer

The last three months have been some of the worst the multipurpose and project carrier sector has endured in living memory. The breakbulk and project cargo sector remain weak, with little suggestion that volumes will improve significantly until the end of 2017, according to the latest Multipurpose Shipping Market Review and Forecaster report published by global shipping consultancy Drewry.

Rates have continued to slide to barely cover operating expenses, as the competing sectors of container ships and bulk carriers have weakened the MPV market ever further in their search for market share. The container lines lost billions of dollars as they filled slots no matter what, whilst the Handy bulk carriers struggled with the Baltic Dry Index (BDI) reaching record lows of below 300 index points on the back of continued oversupply and weak demand. 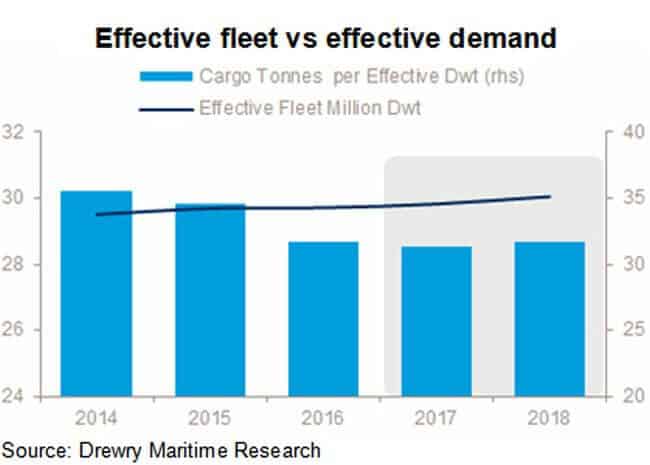 Towards the end of the third quarter came news of one of the container lines heading to the bankruptcy courts, whilst heavy lift carriers Thorco and UHL joined forces to “offer a full range of services”. It is clear that with rates barely above operating costs for many owners, the need to find efficiencies is paramount. Whilst a financially stable company is needed in the long term, it is also true that a seaworthy ship is needed in the short term. Owners that are being paid less than operating costs are forced to make economies somewhere and that is often on the maintenance budget. Shippers have to decide whether their main driver is price or quality, especially when they are putting high value cargo on these ships.

“We are more pessimistic about the near term outlook than we were 6 months ago but we can see recovery for this sector, albeit some way off. It is not our view that there will be a run of (or even any more) big carrier bankruptcies in the near term, however, those who hold the purse strings might well be inclined to restrict finance to some of the smaller owners”, comments Susan Oatway, lead analyst for multipurpose shipping at Drewry.

Whilst there has been a brief upturn in container rates, it is likely to be short lived and not significant enough to take the lines away from the breakbulk sector. However the BDI is on the turn and moved back over 1000 points (albeit briefly) at the end of August. Drewry does see an upturn in dry cargo trade over the forecast period and dry bulk trade in particular. Indeed, although over 2015 to 2020 the MPV market share is expected to decrease by around 1% per year, it is forecast to reach a floor in 2017 and return to positive growth thereafter.

“While our optimism for the sector remains muted, there are some pockets of growth. With oil prices forecast to rise back above $55 per barrel next year the project sector is expected to see some renewed interest. There is also some potential spend in the Middle East and Africa. And there has been renewed interest in renewables, particularly wind in the US. The main problem remains the competing sectors, particularly container shipping where aggressive pricing is drawing cargo away from MPV ships”, added Oatway.