Increasing trade and contracting supply will support a recovery in charter rates on major dry bulk shipping routes, with the prospect of China importing more coal and iron ore to combat pollution and poor quality, according to the latest edition of the Dry Bulk Forecaster, published by global shipping consultancy Drewry.

Macroeconomic policy decisions by the Chinese authorities have had an impact on the overall dry bulk market, increasing vessel demand on key routes resulting in a steady recovery in charter rates. China’s efforts to revive its economy have helped the iron ore trade to revive and are expected to further boost tonne-mile demand, as Drewry envisages more of the commodity coming out of Brazil. 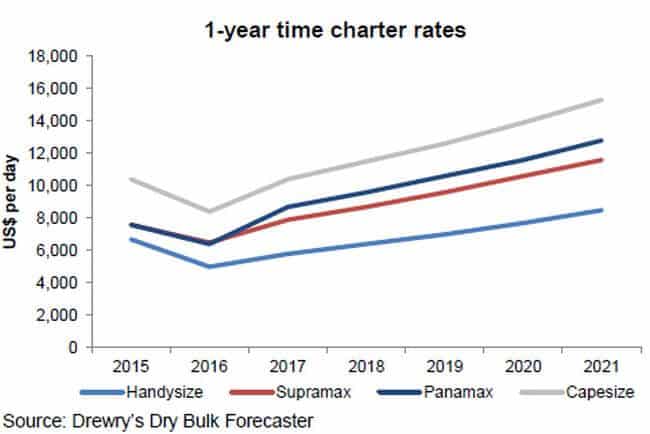 On the investment side, tighter financing options and restrained new ordering have helped the dry bulk market to keep supply in check so far. A high number of slippages and cancellations will impede any substantial growth in deliveries over the next few years. Demolition of ever-younger vessels is expected to result in a slowdown in fleet growth this year. And a similar rate of demolition and delivery in the next year will help deflate oversupply further. Demand growth, which seemed to be an unlikely prospect throughout last year and the early part of 2016, has been helping the dry bulk market come off the bottom.

India’s coal imports increased by 8% in 2015, but are expected to remain flat this year as domestic output will continue to be high. The impending La Niña might impact Australian cargo outflows if rain disrupts rail movement and port activities. This will result in increasing congestion at the country’s ports which in turn will squeeze available coal supply from other sources.

Drewry expects freight rates on the Brazil-China and Australia-China iron ore routes for Capesize vessels to strengthen over the next two quarters, but the return of laid-up vessels to trading could disrupt the expected improvement.

“Demand for coal-carrying vessels will increase in the coming quarters because Japan has decided to increase its coal-fired power generation, while China plans to cut domestic coal production which will increase import demand,” commented Rahul Sharan, Drewry’s lead analyst for dry bulk shipping.

“We further expect the grain trade to remain strong as recent heavy rains have enhanced the prospects for grains in Europe, CIS and North America, especially for maize and barley crops”, added Sharan.

Container Equipment Prices Have Peaked And Are Expected To Moderate: Drewry
Officer Shortfall To Reach Decade High By 2026: Drewry