The outlook for global container port demand is modest growth and numerous uncertainties, but in the face of this, capacity expansion plans are also muted. This means that most world regions will see an increase in average terminal utilisation, according to the Global Container Terminal Operators Annual Review and Forecast 2019 by global shipping consultancy Drewry.

Drewry’s container port demand forecast for the next five years is for global growth of 4.4% per annum on average, lifting world container port throughput from 784 million teu in 2018 to 973 million teu by 2023, an absolute increase of almost 190 million teu. The latest five-year forecast is a far cry from the heady days of the 2000s when forecasts were around 9% growth per annum until the global financial crisis of 2007-08 brought this to a shuddering halt. 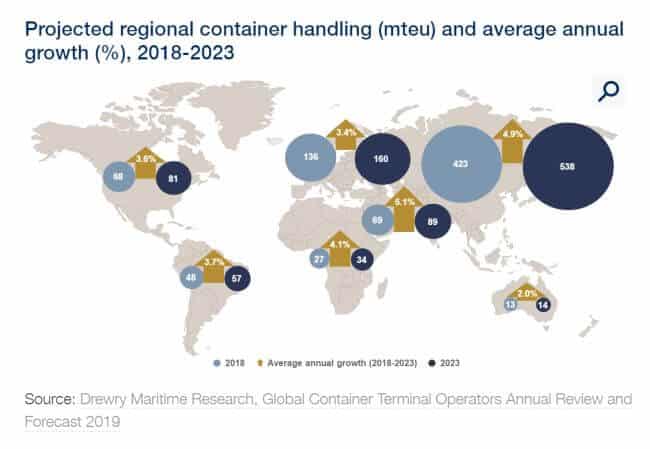 Global container port capacity is projected to increase at a CAGR of around 2%, based on confirmed additions only. This is well below the projected demand growth and reflects the continued easing off from greenfield projects by investors over the last few years. As a consequence, average utilisation at the global level is forecast to increase significantly from 70% in 2018 to 79% by 2023. This though remains a comfortable level for both operators and customer alike.

At the regional level, almost all locations are projected to see their average utilisation levels increase. The sharpest upward swings are expected in Greater China and Southeast Asia (with the former hitting 100% by 2023). Referring to China, Neil Davidson, author of the report and Drewry’s senior analyst for ports and terminals said “The previous very rapid pace of capacity expansion is on hold, with the focus instead being on consolidation of port and terminal ownership into large groups. This, plus the uncertainty about China’s international trade growth in the face of tariff wars and protectionism, suggests that the government is taking a cautious approach.”

Drilling down to the performance of the individual global/international terminal operators, the top seven players are shown in the table below, with throughput adjusted for equity stakes. PSA and Hutchison occupy first and second places respectively, with PSA’s pre-eminence due to its 20% stake in Hutchison Ports. Fortunes varied – PSA volume was up 7% and topped 60 million teu while Hutchison was largely unchanged at just under 47 million. Cosco moved up to third place in 2018 (from fifth in 2017) by achieving over 30% growth, boosted by the OOCL acquisition. This meant that DP World and APMT each dropped one place to fourth and fifth respectively. The latter registered nearly 8% growth, helped by the closer relationship with Maersk Line resulting in more of the carrier traffic directed to APMT facilities. China Merchants (35 million teu) and TiL (26.5 million teu) remained in sixth and seventh places respectively despite both recording double-digit growth in equity-adjusted volume.

“A premier league of seven big operators has emerged, after which the next largest player is a third of the size. Between them they accounted for nearly 40% of global throughput in 2018. Within this elite group, Cosco has moved sharply up the table in this year’s analysis,” added Davidson.