Leasing companies are tightening their stranglehold over container equipment ownership as ocean carriers cut back on new purchasing and sell older inventory for leaseback. But the lessors’ rapid expansion has come at a price as the combination of low borrowing costs and competitive pressures has had an adverse impact on lease rates and accompanying investment returns.

Lease rates slumped to a new low in 2015 and although the improved market climate since has prompted some recovery, they remain well below the long-term average. The pressure on hire rates is not just confined to the dry sector, as reefer and tank leasing rates have suffered in a similar way. 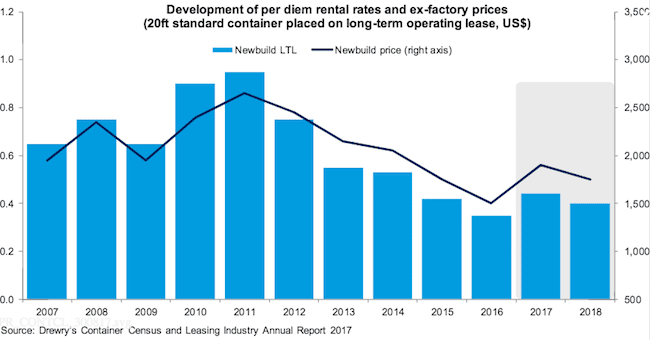 As shipping lines cut back, the lease sector ended up taking 54% of deliveries in 2016, expanding its fleet by 7%. The lines’ weaker commitment could be attributed to renewed fiscal problems, which resulted in several high-profile merges being concluded and the bankruptcy of Hanjin, which has further undermined the confidence of the box shipping sector.

“Most shipping lines are again favouring lease instead of direct investment, as it has been the case since the recession of 2009,” added Foxcroft. “Sale and leaseback is expected to remain a popular option for lessors and lines alike, while leasing firms will also account for at least half of all new container investment through 2017-19. As a consequence, the leasing industry is forecast to maintain its stronger rate of fleet expansion through 2017-19 while transport operators will largely stand still.”

Meanwhile, annual container production fell by 25% in 2016 to reach its lowest level since 2002, excepting the recession blighted year of 2009. Although some increase in production is predicted for 2017, the total is unlikely to match previous years. The trend towards more high-cubes and a bigger share owned by the lease sector looks unstoppable for the rest of the decade.

As a result, the global container equipment fleet grew by just 0.8% in 2016, which was the smallest since the recession of 2009. The slowdown was prompted by weaker trade growth and the uncertain state of the global economy.

“Fleet growth will reassert itself after a poor 2016, but will be weak by historical standards, with little more than 3% a year being forecast through 2017-2019. This might not be achieved in 2017, as greater emphasis may again be placed on replacement rather than expansion,” concluded Foxcroft.