The keel laying of the second 208,000 GT Dream Cruises ship of the Global Class took place at MV WERFTEN in Rostock. This is where the midship ship is made.

The transfer of the passenger ship section for the first ship of the Global Class, the “Global Dream”, from Rostock to the covered dock to Wismar was only two weeks ago. With a length of 235 meters and a height of 20 decks it was the largest part of the vessel ever towed. 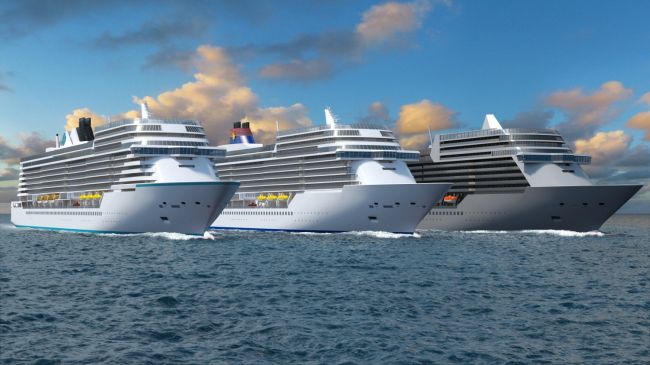 All participants traditionally placed lucky coins on the Pallung before the 95 meter high gantry crane lowered the 470-ton section.

“We are here for the keel laying of the second ship of the Global Class,” said Tan Sri Lim Kok Thay. “But more importantly, we start designing and building a new series of ships, the Universal Class. The first ship will be delivered in late 2022. ”

Cruises are a niche market that accounts for 2.5% of the travel industry and are marketed as a popular alternative to rural holidays. The Universal Class ships are designed, built and operated to make a cruise like a vacation ashore. The 88,000-gross-sized ships can accommodate 2,000 passengers and offer all the amenities of larger cruise ships, without the tightness on board conventional 5,000plus passenger ships. Genting will operate the Universal Class ships, among others, for hotel brands that want to enter the cruise industry and have not had the opportunity to do so due to limited construction capacity.

“Large hotel brands are always mindful of their brand image, so the Universal Class ships are perfect because they guarantee quality” Made in Germany “. They will meet the highest safety and environmental standards, including LNG propulsion, “said Peter Fetten, Managing Director of MV WERFTEN. “After delivery of the two Global Class ships, the largest ships ever built in Germany, we will bring our experience in the construction of universal ships. MV WERFTEN will be fully employed by 2024. ”

The 208,000-gross ship with a length of 342 meters and over 46 meters in width is being built in divided construction at the MV-WERFTEN locations in Rostock, Wismar and Stralsund. The 220 meter long midship is made in Rostock. It was shipped to Wismar in December 2019, where the bow and stern and superstructures are mounted. There, the 2,500 passenger cabins produced by MV WERFTEN Fertigmodule GmbH will be installed and public areas completed. In total, more than 600 companies are involved in the construction of the “Global Dream”.

The ships of the Global Class are designed for the rapidly growing Asian market. They are operated by the shipping company Dream Cruises, which also belongs to the Genting family and offers worldwide cruises. Amenities include a theme park, including a virtual reality rollercoaster, a multiplex cinema, an Asian spa complementing a European spa, plenty of shopping, restaurants and fast food outlets. With 2,500 cabins, the ships can accommodate up to 5,000 passengers with double occupancy, and even up to 9,500 passengers during holiday periods in Asia.

About 3000 Guests And Crew Stuck After Positive COVID Case Confined Them In Cabins
Video: World Dream Cruise Arrives In Singapore, Prepares For Its First Voyage