Global trade enabler DP World has signed a 20-year concession with an automatic 20-year extension with the Republic of Mali to build and operate a 1000-hectare modern logistics hub outside of Bamako, the capital and largest city of Mali. The multimodal logistics platform, Mali Logistics Hub (MLH), will have inland container depots (ICD) and Container Freight Stations (CFS) that will facilitate the import and export of goods.

The Mali Logistics Hub will be located on the main road corridor from Dakar, Senegal to Bamako and close to the Dakar – Bamako rail line and will be capable of handling 300,000 TEU (twenty-foot equivalent unit), 4 million tons of bulk and general cargo. The first phase of the project, with an estimated initial investment of $50 million, will support the growth of the Malian economy by streamlining the import and export of goods. Construction is expected to start in 2019 and is to take approximately 18 months to complete.

DP World will also provide the Republic of Mali with three locomotive trains to boost cargo & passenger traffic along the Bamako-Dakar rail system. Furthermore, the Mali logistics hub will significantly reduce processing times for products entering the Malian market as part of efforts to reduce obstacles to trade and economic development. DP World will also implement its online paperless facilitation platform to accelerate the movement of goods as part of the agreement. 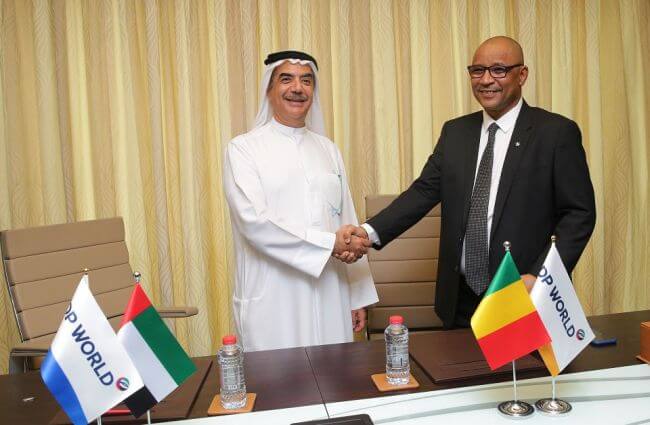 The concession agreement was signed in Dubai on Monday by Suhail Al Banna, Chief executive Officer and Managing Director, DP World Middle East and Africa and Moulaye Ahmed Boubacar, Minister of Equipment and Transport, the Republic of Mali, in the attendance of Malian and DP World officials.

DP World Chairman and CEO Sultan Ahmed Bin Sulayem, said: “The Malian market is expected to grow over the next two decades and is driven by a robust economic and population growth. Thus, the Mali Logistics Hub is much needed and will provide the country with a logistics platform that aims to facilitate the import and export of goods via the Port of Dakar, which is operated by DP World.

“DP World’s investment will significantly cut processing times for goods and thus facilitate trade. We are committed to enabling trade in the region and helping local businesses and people prosper, and look forward to working together.”

Republic of Mali Minister of Equipment and Transport Moulaye Ahmed Boubacar said: “We are excited to partner with DP World on this project. The Mali Logistics Hub will dramatically improve the cost and time of the trade for Mali. The project will provide us with a first-class logistics facility comparable to global standards and will be the largest in terms of capacity”.

“We are confident that with DP World as a partner we will be able to meet the expectations of our people, traders and exporters to have access to more markets and to bring more efficiency and cost-effectiveness to international trade. The project also gives the Republic of Mali the opportunity to be connected to global trade lanes, and to speed up access and transport in and out of the country.”

Distributed by APO Group on behalf of DP World.