Following the profound strategic transformation from black to green energy and the recent divestment of the upstream oil and gas production, the name DONG Energy does not fit the company anymore.

Consequently, DONG Energy has today called an Extraordinary General Meeting to ask the shareholders of the company to approve a change of the company name to Ørsted. 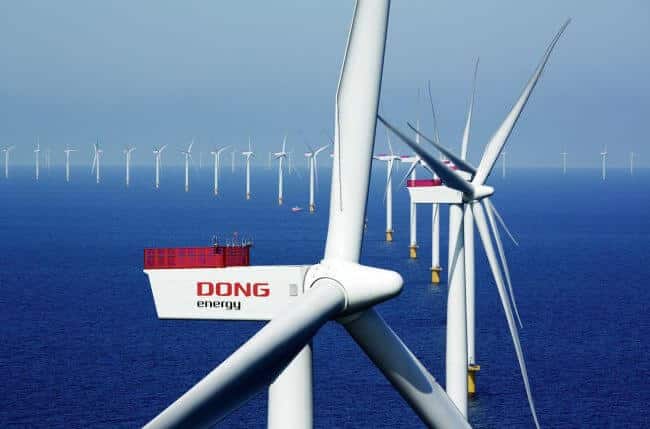 Thomas Thune Andersen, Chairman of the Board of Directors, says:

“DONG was originally short for Danish Oil and Natural Gas. With our profound strategic transformation and the divestment of our upstream oil and gas business, this is no longer who we are. Therefore, now is the right time to change our name.”

“Our vision is a world that runs entirely on green energy. Climate change is one of the most serious challenges facing the world today, and to avoid causing serious harm to the global ecosystems, we need to fundamentally change the way we power the world by switching from black to green energy,” Thomas Thune Andersen concludes.

“2017 will be remembered as the year when offshore wind became cheaper than black energy, as demonstrated by the recent tenders for offshore wind in Germany and the UK. It has never been more clear that it is possible to create a world that runs entirely on green energy. The time is now right for us to change our name to demonstrate that we want to help create such a world.”

From green transformation to green growth

Over the past decade, DONG Energy has transformed itself from an energy company based on coal and oil to a global leader in renewable energy. The company has increased earnings considerably, while reducing the use of coal in its power stations and building out new offshore wind farms (see below). Since 2006, carbon emissions have been reduced by 52%, and by 2023, they will have been reduced by 96% compared to 2006. 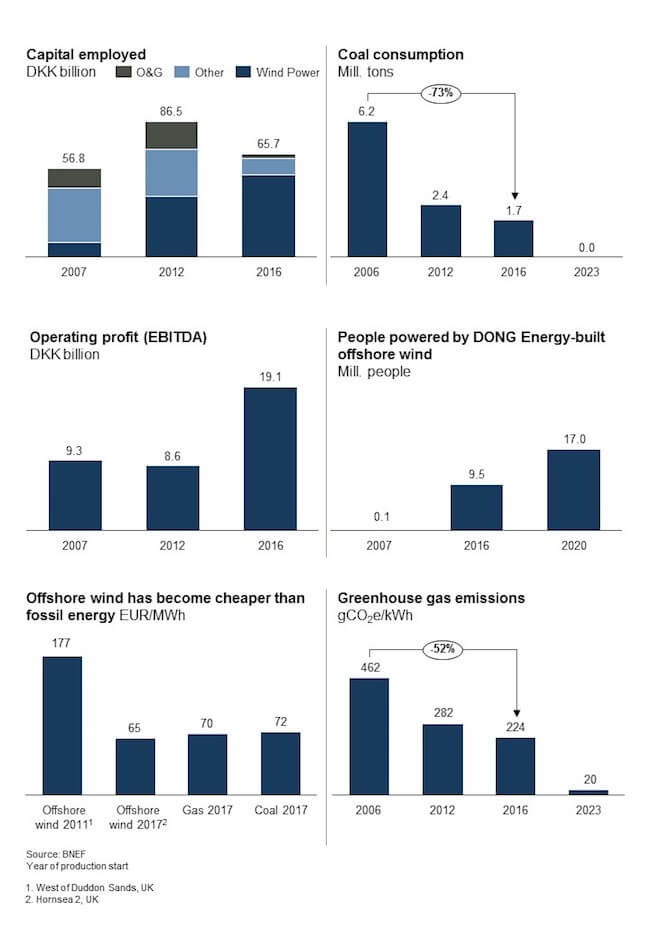 “Today, we’re dedicated to green energy. Our focus going forward will be on green growth based on our existing business platforms in offshore wind, biomass, green customer solutions and advanced waste-to-energy solutions. We’ll also explore new green growth opportunities to strengthening our existing platform, if they support our vision, provide a strong competitive position and create value for our shareholders.”

DONG Energy has divested its upstream oil and gas business and decided to stop all use of coal. In addition, the company has established a new storage team to explore new business opportunities in energy storage. DONG Energy has also established a new corporate ventures unit in Silicon Valley, California, to explore emerging energy technologies and potential long-term business opportunities.

As battery storage and new energy technologies mature and as a more flexible demand side is developed, natural gas will, in the coming years, continue to support the transition to an entirely green energy system. DONG Energy will continue to trade in and sell natural gas to its customers, facilitating the bridge to a world that runs entirely on green energy.

The new name and brand

The new name – Ørsted – references the innovative Danish scientist Hans Christian Ørsted (1777-1851). Ørsted spearheaded several scientific discoveries, including the discovery of electromagnetism in 1820, which helped lay the scientific foundation for how today’s societies are powered.

“We’ve undertaken significant efforts to find the right name and brand identity for our company. Our new name recognises H.C. Ørsted’s curiosity, dedication and interest in nature and our brand identity speaks to the innovation and profound understanding of nature, which is vital to creating a world that runs entirely on green energy.”

The planned name change will necessitate an amendment of the company’s Articles of Association. An Extraordinary General Meeting will be held on 30 October 2017 to formally decide the name change.

The notice convening the Extraordinary General Meeting is enclosed.

As a consequence of the name change, DONG Energy will change its stock exchange ticker to Orsted. The change in ticker will become effective from the start of trading on 31 October 2017, assuming a positive outcome at the general meeting.

The roll out of the new name and design across DONG Energy’s markets, will begin on 6 November

The information in this announcement does not change DONG Energy’s previous financial guidance for the financial year 2017 or the announced expected investment level for 2017.