As of June 2nd 2015, DOF ASA is pleased to announce that the Offshore Subsea Construction Vessel (OSCV) Skandi Africa, delivered from Vard Søviknes to our subsidiary DOF Subsea, has been named “Ship of the Year 2015” in Norway.

Skandi Africa was awarded the prestigious “Ship of the Year” award, established by the Nordic shipping magazine, Skipsrevyen. The award was presented by Norwegian Minister of Trade and Industry, Mrs. Monica Mæland, at the maritime exhibition Nor-Shipping to representatives of DOF Subsea as ship owner and VARD as designer and builder. 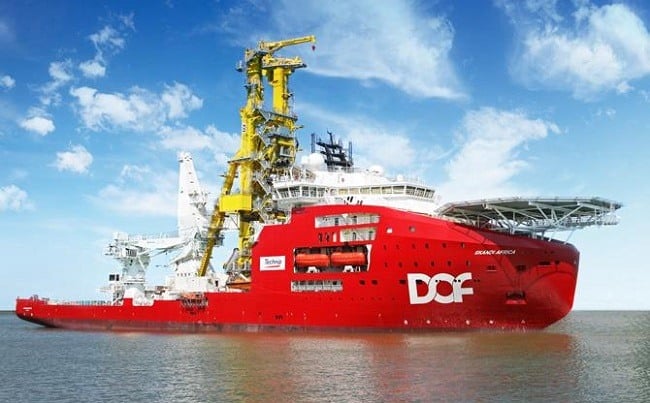 Skandi Africa is the latest purpose built state-of-the-art vessel to join the DOF fleet. It is specially designed and equipped for subsea operation duties with a high focus on sea-keeping capabilities, excellent station keeping performance and low fuel consumption. The DP class 3 vessel is designed for harsh environments, and for deep water subsea construction and flexlay operations up to 3,000 m in depth. The ship’s top-side features a 900 metric ton (mt) pedestal mounted crane with subsea lowering system and combined active and passive heave compensation system. In addition, there is a 650 mt tilt-able lay system for flexible pipes, and pipe storage equipment with a 3,500 mt basket. The ROV hangar is equipped with two heavy duty work ROVs launched through moonpools up to 4,000 m water depth. The moonpools have damping zones, according to Vard Design’s sea-keeping capabilities R&D program.

Given Skandi Africa’s impressive capacities, the jury believes that the “Ship of the Year” for 2015 is setting new records within her field of work.