DNV GL received the Environment Award for its leadership of the Green Coastal Shipping Programme at the Lloyd’s List Global Awards 2015 ceremony in London last night. The programme aims to encourage the development and implementation of green technology concepts in Norway’s coastal and short-sea shipping sector.

Richard Meade, editor of Lloyd’s List, said: “They stood out as an impressively ambitious example of environmental aspiration coupled with a pragmatic understanding of business and politics. The prospect of a long-term public-private partnership programme that offers tangible targets struck our panel as a potential game-changer worthy of public support.” 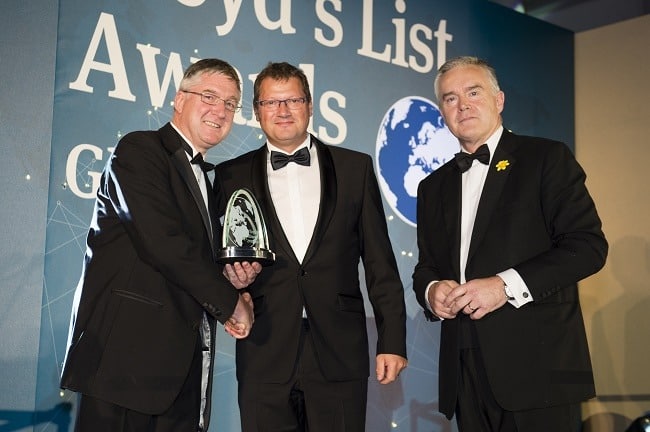 “We are delighted and proud to receive this award,” says Narve Mjøs, DNV GL’s Green Coastal Shipping Programme director. “Not only because it recognizes the work we have done together with our project partners, but because it confirms the industry’s awareness that we need to keep up our continuing efforts to make shipping more efficient and environmentally responsible through innovation,” he says.

Initiated by DNV GL, the Green Coastal Programme was kicked off at DNV GL’s headquarters earlier this year when the Norwegian Minister of Trade and Industry, Monica Mæland, and the State Secretary for the Ministry of Climate and Environment, Lars Andreas Lunde, signed a declaration of cooperation with key players in the Norwegian coastal shipping industry. The programme declaration aims to ensure that Norway has the world’s most environmentally friendly fleet of coastal vessels, realized by the industry and government working together in a long-term partnership program.

“The Green Coastal Shipping Programme has been designed as a world showcase for green coastal shipping, illustrating how we can take new technologies and, by building solid green business cases, implement them more broadly. The award shows that we are on the right track and that our initiative has gained international attention,” Narve Mjøs says, adding that he has been invited to speak to the Swedish Parliament later this month about the possibility of launching a similar programme in Sweden.

DNV GL and 31 partners from the Norwegian maritime industry and the Norwegian authorities recently presented five pilot projects that are now pursued as part of the programme. The pilot projects include several different ship types and infrastructure with an emphasis on alternative fuel concepts: