A major barrier to the growth of the marine energy industry is the risk associated with projects and the accompanying uncertainty of return on investment. Engineers face a large number of unknowns at the start of a marine energy project, which is an impediment to the rapid expansion of the industry.

The tools, which were launched at the RenewableUK Wave and Tidal Conference in Belfast, allow users to accurately model wave and tidal energy converters operating in farms of multiple devices and are a vital addition to DNV GL’s extensive software portfolio. 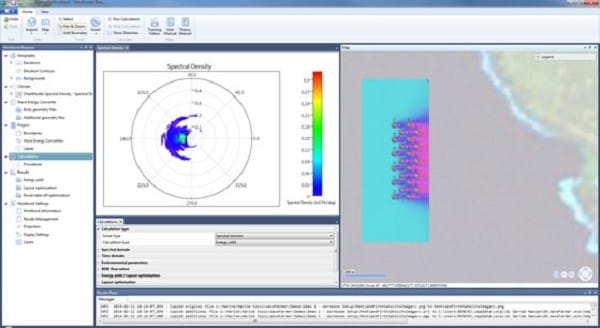 Paving the way for a full-scale commercial marine energy farm, which would have the potential to harness in the region of 10,000-100,000 TWh of energy per year from the ocean, WaveFarmer and TidalFarmer tools provide crucial insight into the potential of projects by accurately calculating future annual energy yield, as well as number of other important factors.

WaveFarmer and TidalFarmer have been under development at DNV GL for over seven years, during which time they’ve been used in prominent research projects as well as commercial farm design and due diligence jobs. 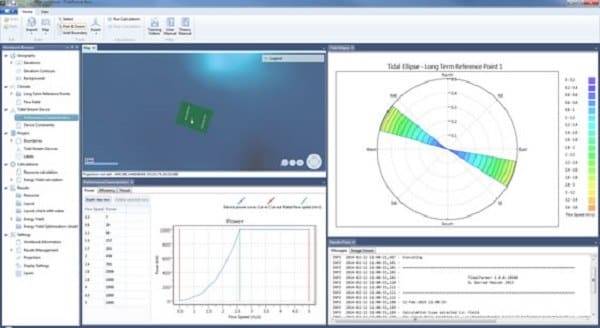 The tools have benefited from extensive verification exercises against numerical models and validation against experimental data; most recently under the £8m PerAWaT project (Performance Assessment of Wave and Tidal Array systems) commissioned and funded by the Energy Technologies Institute. As part of this project, WaveFarmer and TidalFarmer underwent thorough Beta testing to ensure they met industry requirements.

Dr Joao Cruz, Head of the Wave and Tidal Energy Advisory Department, DNV GL commented: “Today’s launch marks a significant milestone for DNV GL and the nascent marine energy industry. There are now two software tools; WaveFarmer and TidalFarmer, that can be used to plan and analyse arrays of wave and tidal energy converters with confidence. The emphasis on making the tools user-friendly has been particularly important to us and above all the accuracy for energy yield assesment.

The extensive verification and validation programme that the tools have been subjected to under the PerAWaT project is unprecedented in wave and tidal energy research, resulting in a suite of software tools that will help the industry to progress over the coming years.”

Dr Ben Child, WaveFarmer Product Manager, DNV GL said: “There is no room for errors when it comes to planning marine energy projects and WaveFarmer and TidalFarmer will be crucial in reducing a key element of uncertainty in that process.”

Dr Steve Parkinson, TidalFarmer Product Manager, DNV GL added: “With the release of these tools we want to share the knowledge gained through our extensive research and development activities with the industry in order to help it grow in an efficient, cost-effective manner.”

TidalFarmer uses a three-dimensional representation of the resource to accurately predict the performance of a tidal stream farm. The calculation engine includes corrections for local blockage effects due to device arrangement, the modelling of interactions between multiple devices and the increase in turbulence intensity downstream.

WaveFarmer is linked to three separate calculation engines, enabling it to determine hydrodynamic interaction effects for farms ranging from a handful of devices to utility-scale projects. An advanced Genetic Algorithm finds the best farm layout for a particular location. The tool then lets the user explore energy yield, power absorption, data tables, graphs and maps to gain considerable insight into their future marine energy project.

DNV GL has been at the cutting edge of renewable energy project planning for over 30 years, beginning with the development of the WindFarmer software product. WindFarmer has established itself as a trusted tool for project developers, investors and other stakeholders to reliably plan and analyse various aspects of farm design. WaveFarmer and TidalFarmer benefit from the rich heritage of the WindFarmer tool and will take their places alongside it in the company’s software portfolio.