The question of how digital innovation would shape the maritime industry was the focus of the DNV GL Innovation Day 2015. Invited guests from leading shipping companies, managers and owners, manufacturers, governmental agencies, academics, and other stakeholders were given a look into the potential in presentations from DNV GL and external experts.

“Data-smart shipping is a lot about leveraging and capitalizing on already existing opportunities. It’s not only about generating new big sets of data, but about using and managing the data already available in a smart way,” said Knut Ørbeck-Nilssen, CEO of DNV GL – Maritime, in his introductory speech. The journey towards greater digitalization has already started, he noted. “Fuel saving is one of the first playing fields, where owners have already invested and where they can expect cost savings by applying new technologies. The second area of interest is certainly asset integrity management,” he said. 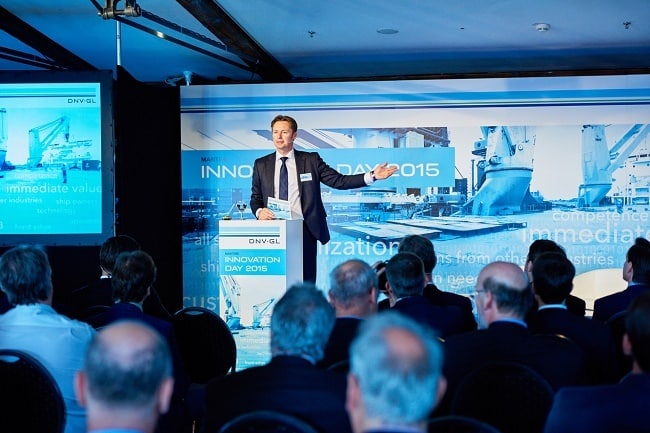 The keynote speech was delivered by Lasse Kristoffersen, CEO of Torvald Klaveness, who identified a fundamental and exponential change in the level of connectivity, computing power and amount of data being generated every day. “Ships are definitely part of the information business,” he said, “and the information business is changing now and it is changing fast.” To adapt to this change, shipping needed to shift focus from thinking of each ship as a system to all ships as a system – where greater information sharing could benefit the industry and individual businesses, through more transparency and better optimization. Taking this approach had resulted in Torvald Klaveness significantly changing its strategy, he said, notably investing 1–2% of revenues into digital, looking for new ways of working, and establishing a digital laboratory – KLAB. Experimentation, diversity and agility in business were the keys he said, but data was at the core: “You are sitting on a gold mine. Watch it, structure it, store it,” he said.

With a self-driving car looking like it might be just around the corner, the unmanned ship could be following close behind, as Sauli Eloranta, SVP Technology Management at Rolls-Royce Marine, showed. “We are at the dawn of the ship intelligence era,” said Mr Eloranta, positing that “unmanned ships will be the most fundamental change in shipping that we will experience.” Most likely beginning with local applications, Mr Eloranta laid out a time line which would see fully autonomous ocean going vessels in operation by 2035. There was work to be done in creating a regulatory framework for such craft and in assessing the new technologies required, he said, but the end result could be more efficient and safer ship transport.

Having better data and being smarter about using it extends beyond the ship in operation, Christian Cabos, DNV GL – Maritime’s Head of Department for Information Management Technologies, showed. Looking at the potential of using interlinked information to support the hull inspection process, he demonstrated how better data capture, management and sharing could unlock efficiencies in maintenance, avoiding downtime and costly repairs. He also presented some of the projects DNV GL has been developing, including a demonstration of IRIS – a camera and tracking system for inspectors or surveyors working inside tanks. The system can be used to automatically link photos taken by the surveyor with the corresponding points inside a 3D model of the vessel, something that could also be extended to measurement points in the future.

The use of digital models linked back to a presentation in Session 1 by Nikolaos Kakalis, Manager R&D, Region East Med, Black & Caspian Seas at DNV GL. Mr Kakalis looked at growing digitalization in the context of the “digital twin” – the idea that for every real object, there will be a digital duplicate, modelled to exactly recreate its properties. In his presentation Mr Kakalis featured the DNV GL COSSMOS tool, which can simulate and optimize complex and integrated ship machinery systems – a platform leading the way toward a “digital twin” for ship machinery. He demonstrated how a model could be used to optimize energy efficiency in design and operation, for example in finding the optimal sequence of steam valve openings to minimize fuel consumption during cargo heating in oil tankers.

A closing panel, featuring Pierre C. Sames, DNV GL Maritime’s Director of Technology and R&D, alongside the presenters, examined the topics of the day, including the barriers to greater digitalization, the challenges in moving from a product to a service delivery business model and how the maritime industry could accelerate digitalization.

You can find all of the presentations, alongside images from the 2015 Innovation day, here