The formal handover of the Approval in Principle took place in Tokyo on 5th July. The new, innovative design has been found to comply with DNV GL class standards and other relevant industry standards.

The FLPS concept is a combination of a Floating Storage and Regasification Unit (FSRU) and a power plant. It is expected to be installed in locations where alternative onshore infrastructure is not feasible or commercially viable, while energy demand is rapidly increasing. The FLPS solution is also in line with the worldwide trend for decentralized power generation. 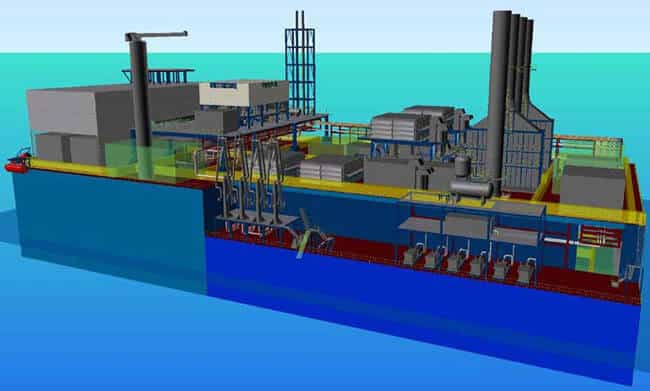 It provides the opportunity for the receiving location to take advantage of the availability of natural gas as part of their power mix.

The main functions of the FLPS are LNG loading from a visiting LNG carrier, regasification of the LNG, power generation using natural gas and export of electricity to onshore grid. The FLPS is designed to be capable of remaining on location for up to 25 years without dry-docking.
The FLPS concept considered uses a single point mooring tower yoke for position keeping, if the jetty meeting the draft requirement for both LNG carrier and FLPS is not available.
The LNG is stored in two SPB® tanks (Self-supporting, Prismatic shape, IMO type B) developed by Japan Marine United Corporation (JMU), IHI’s joint partner and contained within the hull of the FLPS.

Regasification takes place in the topside facility located on the deck of the FLPS and the gas is then fed to the power generation system, which uses an energy-efficient combined cycle consisting of gas turbines with heat recovery steam generators and steam turbine. The power is supplied to the onshore electricity grid by high voltage subsea power cables.

“We are pleased to be involved together with IHI in such a project, as it represents a move forward in developing technology which can be used to supply energy needs around the world. It has potential for many different applications, both short term and also long term, and will add a flexibility to the energy mix wherever it may be deployed.” says Conn Fagan, DNV GL Vice President, Business Development, Offshore Gas Projects.